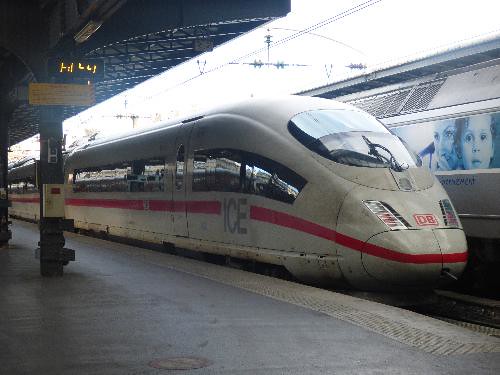 Willkommen züruck to my blog! In this post, I want to talk a bit about the transportation here in Germany, specifically to explain the train system, since that is probably the best way to get around Germany as a student. While most people are probably familiar with the German automobile manufacturers, and while Germans do love their cars, the rail systems here in Germany are also quite good, and for students who can’t afford to have a BMW, is really the best way to see Germany. The rail system here can be a bit complicated to a newcomer, so hopefully this blog post will help to explain it.

Most of Germany is connected by the Deutsche Bahn (which literally means German railway) which offers a few different types of services. Deutsche Bahn is a federal system, covering the entire country, so in a way it is similar to Amtrak in the United States. Deutsche Bahn is famous for the ICE trains (Inter City Express), which generally connected the larger cities and metropolitan areas with high speed services, for example, it is possible to take ICE from Mannheim to Frankfurt or Stuttgart with the journey only taking about a half hour. ICE can also take you to Munich from Mannheim in about 3 hours or Berlin in about 5 hours. I’ve used it quite a bit, including for my trip to Paris which takes under 3 1/2 hours. The ICE trains can go as fast as 300 km/h which is about 186 mph. While ICE is a great way to travel, and is very efficient, comfortable and fast, it is quite expensive.

The next step down from ICE would be the IC and EC (Inter City and Euro City) trains. The Intercity (IC) trains are also long distance like the ICE, but are slower and make more stops than the Express does. The EuroCity (EC) trains are international long distance trains that you could take to other countries for less than ICE would cost. I used the IC train from Mannheim to Mainz, and despite it supposedly being slower than ICE, still only took about 45 minutes since there are no stops between the two cities.

The next service class down from IC and EC is the Regional Express (RE) and Regionalbahn (RB). The RegionalExpress trains are medium distance that are still semi-fast, and as the name implies, are used on a regional level only, to connect smaller cities nearby with a larger one, for example. The RegionalBahn is very similar to the RegionalExpress, but generally makes more stops and is therefore slower. Again, it is used to connect a region.

The next levels of service are generally limited to the larger metropolitan and population centers, however they can be found in places like the Mannheim area (called the Rhein-Neckar region). In these larger areas where there is a handful of cities with larger populations, you will find the S-Bahn trains, which are suburban trains similar to SEPTA’s regional rail system. They run fairly frequently and make many stops in towns that are nearby cities, for example, you can take the S-Bahn from Mannheim to other smaller cities and towns like Worms and Speyer. Some very large cities will have a U-Bahn system, which is not run by Deutsche Bahn but by the city itself. Only in very large cities like Berlin and Munich will you find the U-Bahn, which is a subway system like the NYC Subway or the D.C. Metro.

Other cities, such as Mannheim/Heidelberg/Ludwigshafen also have a network of light rail/tram lines that connect these cities to each other as well as providing you a way to get around the city. In the Rhine-Neckar region these are run by the RNV, and are quite affordable, and as a student you can use all of the trams plus the S-Bahn and RegionalBahn trains within the region as much as you want with the semester ticket which costs 150 EUR. I use the trams all the time to get to the university from my apartment, since it saves me time and walking. The trams run every 10 minutes on weekdays.

That’s it for now, until next time I’ll leave you with a picture of an ICE train. Tchüß!