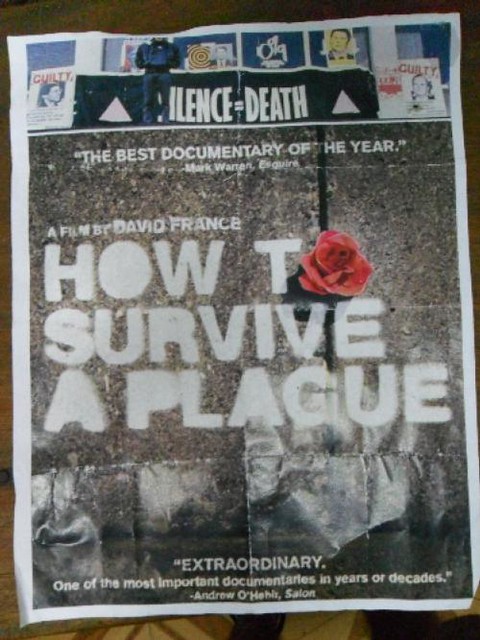 On Monday, the US Embassy hosted a free showing of the critically acclaimed movie “How to Survive a Plague” at the Spanish Cultural Center of Equatorial Guinea. The showing was followed by a discussion with the writer/director David France. The film is a documentary about the Act Up movement to fight AIDS in the US. So let me frame it this way: we watched a documentary about a group consisting largely of gay men exercising their rights to peaceful protest in an effort to gain better access to effective healthcare treatment for AIDS–in a country where the people have no right to peaceful protest and little access to any healthcare whatsoever. And this country is part of a continent where there currently exists a rampant and poorly (if at all) controlled AIDS epidemic and widespread discrimination and human rights violations against homosexuals.

That’s an ironic position to be in.

Now, I’ve been in full realization of many of the problems faced by this country and this continent, but the juxtaposition here was so obvious you could taste it. It was a fantastic movie and I learned quite a bit about the topics it directly addressed, but it indirectly led me to think a lot more about the situation where I am right now. It was impossible for me to be in that situation and NOT think about my privileges as an American on so many levels. Here I am, paying more money for a study abroad program than most people here can pay for a house. If I ever get AIDS, I probably won’t die from it. If I have ANY medical emergency, I can get emergency treatment even if I can’t pay for it–I would, with absolute certainty, be right now if that weren’t the case. If I ever have the desire, I can stand in front of a government building with a sign and voice my opinion. Hell, I have the freedom to attain the knowledge and resources to run for office. I have or can attain the resources to learn about essentially anything I want, and I grew up in an institution that showed me how and encouraged me to do so. Anyone I know or will know back home who is gay won’t face nearly the discrimination they would here.

None of those statements apply here.

It’s one thing to know about these issues, and a completely different thing to be here and then to have your privileges shown on movie screen and blasted through speakers in front of you and some of those who aren’t as fortunate. I don’t mean to paint life here as a grim and horrible thing; in fact there are many positive aspects of the culture and lifestyle of this country, and I can learn a great deal from that. But this experience forced me to look inward and my own, purely circumstantial fortune and be grateful.