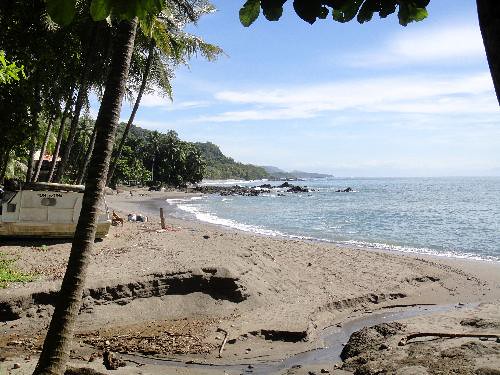 This past weekend, several friends and I decided to take the journey to one of the most beautiful beaches in Costa Rica – or so we heard. Montezuma is located on the southernmost point of the Nicolay Peninsula. No one was quite sure how long it was going to take to get there; all we knew was that we were taking a bus, then a ferry, and then probably another bus? I’ve quickly learned that Ticos aren’t really big on giving exact directions or plans, ever. You just have to trust that they’ll get you to your destination about the time you need to get there (which they typically do).

Anyways, we all meet at the bus station after our various volunteer projects on Friday afternoon. We hopped on the bus and were off! After a few hours on the bus, we came to a port at which we had to transfer onto a large ferry. I don’t take ferries very often, so I was surprised when the bus came on the ferry with us! After about an hour or so on the ferry, we docked and got back onto the same bus which drove us for another few hours deep into the jungle. That bus dropped us in a small town at which we had to take another bus to get to our final destination. In all we spent about 6-7 traveling, but it was 100% worth the trip.

Since it was nighttime when we arrived, we couldn’t see much. But Saturday morning was an explosion of color! Well, mainly green, but an explosion of nature if nothing else! Our hostel was nestled right into the middle of a mountainside so we also had plenty of visiting creatures (coatis, monkeys, even skunks!). After breakfast, we decided to hike to the large waterfalls we had heard so much about. It took us a little time to actually find the right path, but even then, the path didn’t last for very long. Since it’s currently the rainy season, or winter, here in Costa Rica, the path was more flooded than usual and therefore we had to do a lot of stopping and starting to take our shoes on and off when necessary. But, the waterfall was fully worth the trek. It was enormous! And had a huge pool at its base, so we spent most of the morning jumping off rocks at the base of the falls.

After a few hours there, we made our way back into town and explored the local organic farmers market for a while. Then, after lunch, we headed to the beach. To be entirely honest, Montezuma felt like a dream. The beaches were so picturesque they seemed like they could only be found on a postcard. We spent the rest of the day on the beach, just lounging and enjoying the beautiful scenery. On Sunday, we woke up relatively early (it’s easy to wake up with the sun here) and spent the entire morning on the beach. Then, we checked out of our hostel and prepared for our long journey home.

Although, unfortunately, it was a short visit, it was a beautiful and relaxing visit. There is truly something to be said about the calming presence of nature. The lack of technology was refreshing and freeing. It was wonderful to go off the grid for the weekend and recenter myself. I feel it’s vital for the health of our mental state, especially when immersed in a foreign culture.