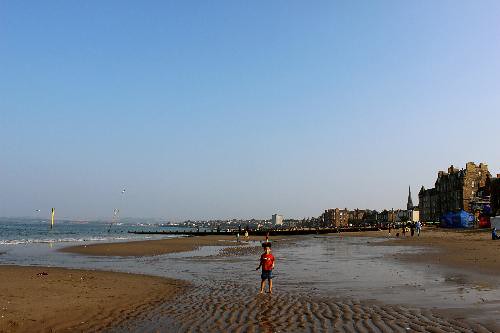 Portobello Beach in Edinburgh, Scotland is the most gorgeous beach I have ever seen. I have never seen so much bright blue water or have walked such fine sand in my entire life. Even though that sounds very cliché, it is true.
It is still relatively nice here in Southern
Scotland despite what I first imagined the weather being like. I assumed the weather here would be cold and rainy. I packed raincoats before leaving and my best boots. I braced myself for gray, damp, and chilly weather. I arrived in September, when Philadelphia was still 88 degrees. I expected the worst though, when I got off the plane in Edinburgh. Surprisingly, it was almost 70 degrees and was very pleasant. Although it was very gray and looked as if it had been raining, it was nice out. It is now October and the weather is still very nice. Fall weather finally kicked in. The kind of chilly I would expect back home crept over Edinburgh recently, but it has not been anything too bad. At least not yet. That is why my flat mates and I decided to go to the beach in September, when it was even nicer to go out.
We were still not used to Scottish weather and we all took a chance by heading to the beach on Saturday afternoon. We all heard about how beautiful it was, so we gave it a shot. All four of us wore raincoats there just in case, even though the sun was shining brightly and it was still sort of warm. It took about 40 minutes to reach the town limits of Edinburgh. We were not by the North Sea. I forget which body of water we were near, but it was small in comparison to the North Sea or Atlantic. The long bus ride was well worth the trip. Seeing the coastline and seeing the waves made us excited. When we got off the bus we walked only a block to the get to the beach. It was so close to residential, city looking buildings that it surprised us. The boardwalk was also very different from what we were used to. I was used to seeing big, old shore houses and sand dunes that stretched for miles before any ocean water was accessible, but it was different at Portobello Beach. It was calmer than I expected too. The boardwalk was not a boardwalk, but just a normal looking street with benches and food stands. It was the color red and winded around the beach. Another thing that surprised me was the sand. I expected something like the scenes out of movies where Scotland is portrayed as a rocky coast, but the sand was actually finer than at New Jersey beaches and white.
We were all stunned by the miraculous view. The waves were beautiful and softly hit the beach. The city directly behind it looked beautiful. Everything was beautiful. The weather was nice and we saw children swimming in the deep blue ocean. One thing that I thought was odd was this: A couple of kids that were very young weren’t wearing anything. They galloped around on the beach and swam freely in the ocean. I thought it was odd, but then I admired it. Everything at that beach was open, care-free, and marvelous. It was not something I expected to see in Edinburgh, but I am glad I did. I even swam a little in the water. It was cold at first, but I knew I had to do it while the opportunity lasted.