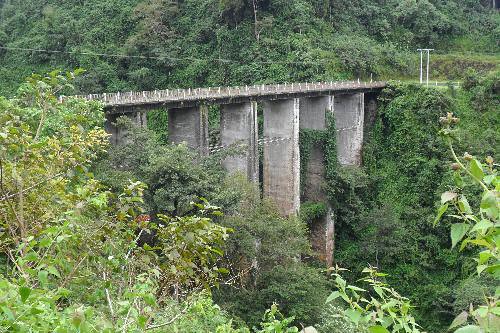 A note on my last blog: I noticed a typo. About halfway through the second paragraph, the sentence should read “…with absolute certainty, be *DEAD* right now if that weren’t the case.”

Yesterday, we went up to the Bioko Biodiversity Protection Program (BBPP) field center in Moka, a village in the mountains to the south. We stayed overnight and came back this morning. This is where we’ll be living for two weeks in November while we’re conducting our research, which I’ll describe in the future.
But that’s not the interesting part. The interesting parts were the trips up there and back. The major roads travel more or less along the outer few miles of the island, sometimes being next to the coast and other times being just a few miles inland. Since Malabo and Moka are on opposite sides of the island, we were able to travel there on the west side of the island and back on the east side. As a result, we were able to see what life was like across the entire island. We passed through a bunch of different villages, and even took a detour to drive around the hometown of one of our professors.

What was interesting about these towns was the surprising variation. I expected the majority of these places to look like small farm towns with little development, but not all of them were. For example, our professor’s hometown had a good amount of shops, paved roads, power lines, and a port. The first thing I noticed about this village and the others that had paved roads (which was most of them) was how clean these towns were. I have no idea what the waste management system is out in those villages, but evidently they at least do a better job of keeping the streets clean. Some of these villages also had large shiny buildings being constructed, which must be part of the government’s development plan. I also learned that that plan includes making electricity available to every village on the island. That doesn’t necessarily mean that every HOUSE in every village will have electricity, but that every house will have it available if they can afford it. And some of these villages were nothing but 5 or 6 shacks on the side of the road with power lines right next to them, so it was pretty clear that they probably didn’t actually have electricity. I’m not sure whether or not there is a plan to get it to them. It was certainly eye-opening to see towns just off an incredibly nice major road with dirt/gravel roads, no electricity, and almost certainly no running water. Some towns had stands selling produce and some pretty large plots of land where crops were growing, but others didn’t. So that means I was looking at towns where people literally lived off just enough (and maybe not even enough) crops and animals (likely bushmeat or a few chickens) and nothing more. No contact with the outside world. No sanitation. Likely no access to healthcare. Makes you realize how lucky you are.

We also got some incredible views of the landscapes throughout the island, as well as a glimpse at the roadwork being done. There were quite a few bridges under construction. Apparently there are a good number of bridges left from Spanish colonial era (which ended in 1968) that have been essentially rebuilt by the Equatoguinean government over the past 40 years. We stopped at one incredibly tall bridge crossing over the most beautiful and rainforest-y ravines we’ve seen. Walking along the bridge and looking down was a bit unsettling because it was so large, but regardless it was one of the most breathtaking scenes I’ve ever laid eyes upon.