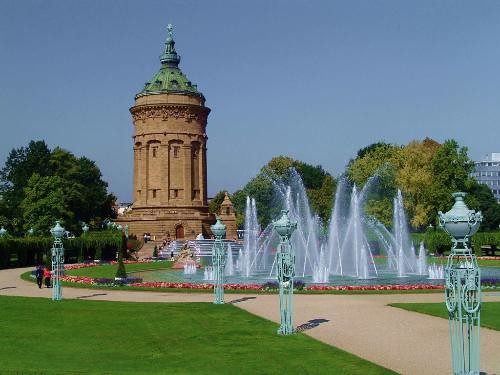 Although Mannheim is not a well known city, there are still things to see and do. Like I said in my previous blog, Mannheim was completely destroyed at the end of the war, but there are some historical sites left. The most famous and the most prominent is the Mannheim Palace, where the Palatine royal family used to live. Today the palace is home to the University. In fact I have class in the palace almost every day. It’s really cool to go to class inside a palace, but I will cover going to school here in another blog.

Another major historical site is the Wasserturm, or the water tower. The water tower lies on the outer edge of the center and is just around the block from where I live. It’s a nice example of some older architecture, something that is not seen too much in Mannheim. Behind the water tower there is a fountain with a small garden. This is an ideal place to sit down and relax when it’s nice out.

Farther away from the center there’s Luisenpark, a recreational park built in the early 20th century. It’s considered one of the nicest inner city parks in Germany. The cost to get into the park is 3 euros, but for that money you can see numerous attractions inside of the park. Luisenpark has several gardens and greenhouses, including a Chinese garden. This is also another ideal location if you want to get away from the noisy streets of the center.

Other main sights in Mannheim include the Jesuit Church and Marktplatz. Apart from that, there is not much else to see in terms of sightseeing.

Mannheim though is situated very close to other, more historical cities. Heidelberg is only a 20 minute train ride from Mannheim. This city is regarded as one of the nicest cities in Germany. It has a big old town sandwiched between two mountains. The royal fortress of the Palatine also overlooks the city and the river Neckar. The mountains around Heidelberg also offer great hiking trails and scenic viewpoints.

Speyer is also just a short train ride from Mannheim. This city is famous for its big romanesque church. Called the Speyer Cathedral, it was built in the 11th century and today is a UNESCO world heritage site.

Other cities like Worms and Schwetzingen also have old churches and palaces for you to see.

In the end, Mannheim offers some sightseeing opportunities, but it’s greatest aspect is it’s ease of travel to more picturesque cities. (picture of Mannheim’s Wasserturm)