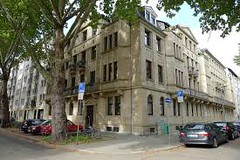 Outside of Germany, Mannheim is not a very well known city. At first I struggled to find it on a map and when I talked to my friends that I was going to Mannheim, their reply was, where’s that? Of course, there is a very good reason why Mannheim is not known, there’s nothing here.

Mannheim actually has a very colorful history and has served as the home for important historical figures. Throughout the 18th century, Mannheim was the royal city of the Palatines, an important and powerful royal family in Germany. Mannheim also served as Mozart’s home during this time and the city had a highly regarded orchestra. In the 19th century, Mannheim was the birthplace of the motorwagen, invented by the famous Karl Benz. Unfortunately, Mannheim was completely destroyed by allied bombings during WW2 and since then the city has never reached its former glory.

Today, Mannheim is a mix between a residential and industrial city. There is absolutely no tourism in Mannheim, this is not a city you come visit. For the most part Mannheim’s economy survives on manufacturing. Mercedes builds engines in Mannheim and BASF, a chemical company, has a massive plant just across the river. You can definitely see and feel the industry here. The BASF plant is huge and the factory smoke towers can be seen from the river. Also Mannheim has a port on the Rhine river and you can see cranes and containers. This doesn’t detract from living here, but it’s just a reminder that Mannheim is focused on industry. As for the residential aspect, most people live in apartment building. These building are no more than 5 or 6 stories high and really are uninspiring pieces of architecture. Historical buildings are few and far between. Outside the center there are some green areas with parks. Here is where you find houses and nicer apartment buildings.

Across the river Neckar lies Neckerstadt, a neighborhood of Mannheim. This area is probably the least scenic. Most of the buildings are just slabs of concrete. The streets are also dirtier in this area and the atmosphere is not as good as in other parts of Mannheim. Neckerstadt is where the poorer population of Mannheim lives and you can really see it. The stores there are mostly discount stores. A lot of minorities live in this area, especially the Turkish.

Mannheim is not your stereotypical German city. If you are looking for old buildings and cobblestone streets, look elsewhere.