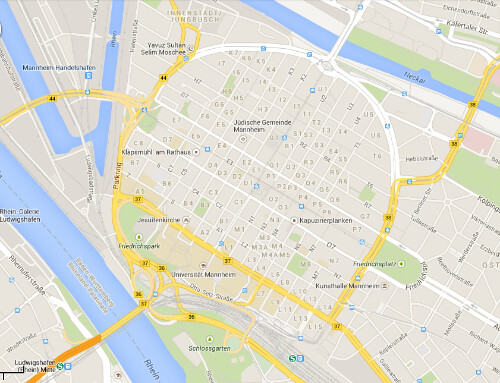 The first time I heard of Mannheim was when I was looking through potential study abroad locations. I was familiar with places like Munich, Berlin, and Frankfurt, but Mannheim was a city I never heard about. In fact, I was a bit surprised I didn’t know about it because I consider myself a geography nerd. I quickly came to learn that Mannheim was a medium sized city in southern Germany. Apart from that, I didn’t research the city much else before making my decision to study here. I only really started looking into the city when I was trying to find a place to stay in early July.

Mannheim lies on the northern edge of Baden Wurttemberg, a state located in southwest Germany. The city itself is a good size, around 300,000 people live here. Although it’s a lot smaller than Philadelphia, it still feels like a city. Mannheim is bordered by two rivers, these rivers form the western and eastern edge of the city. On the west side is the Rhine, a large and important river for Germany and Western Europe. On the east side is the Neckar, a small regional river. The city center is clearly defined by the ring road that encircles it. The center itself is peculiar in the way it’s laid out. Unlike most European cities, Mannheim’s center works like a grid. Mannheim is called a Quadratestadt in German. This means that the center is divided up into small quadrants. Think of these quadrants as one block in length and one block in width. Each individual quadrant is lettered and numbered. The numbering system works off the center square in the city called Paradeplatz. The farther a block is from this square the higher the number. This works in both directions, north and south. This means a block numbered 3 is closer to the center than a block numbered 7. The letters are assigned based on how close a block is to the western edge of the center. That means that a block lettered B is more west than a block lettered J. Where the blocks are lettered P lies the main street of Mannheim, called Die Planken. Walking up Die Planken one can arrive to Paradeplatz, the main square.

At first this system was confusing to me and it did take a couple of weeks to understand addresses, but now I find it much easier than a conventional city layout. It’s much easier to memorize blocks rather than street names. Also asking someone in German for an address is much simpler and causes less misunderstanding.