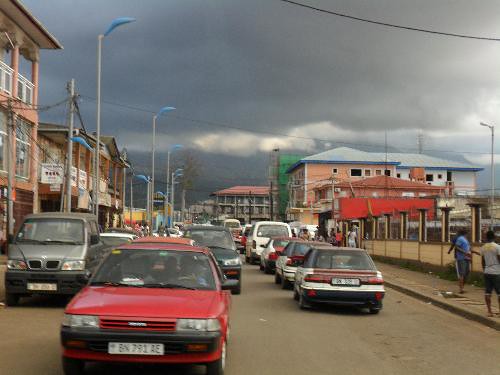 There are a lot of facets of culture here that differ pretty substantially from the way that we live our lives in America. This blog is going to be more or less a list of things here that seem odd. Getting used to most of them hasn’t necessarily been difficult, but these are just the kinds of things that make you stop and think, “Huh….alright, I guess.” Unfortunately, I haven’t gotten any good pictures of these things
•   The dogs: I’ve probably mentioned the dogs before, but it’s certainly one of the first things I noticed. There are stray dogs all over the place. They’re all incredibly docile and malnourished, and generally avoid people. Often you’ll see them lying underneath a car or just on the side of the road. They almost always have thin or matted coats, and often have cuts or sores on their ears or side. Sometimes you’ll see one without an eye. It’s sad, and there’s clearly no system in place like a pound or an SPCA.
•   Treatment of Women: Many women work, and there isn’t much inequality but that’s because most people work menial jobs. Culturally, women aren’t respected much. While we’re walking in groups, strangers will walk up and ask one of the guys “are these women yours?” And if we don’t say yes, they will, with great haste, start hitting on them all. Polygamy is part of the culture here, though I’m under the understanding that it’s not a majority of the population that practices it. Men are almost always addressed before women no matter what. The men can be overly hands-y toward women, and street harassment is more prominent than in America. I’ve also noticed a far greater number of males at the University. This is all pretty unsettling.
•   Hygiene: I wouldn’t go as far as to say that everyone here is filthy, but the hygiene standards of most people here definitely don’t meet ours. [I should note that this doesn’t refer to the expats or most of the Equatoguineans who obviously have money.] People smell like they don’t shower. And almost no one showers with hot water, including us (but we’re in the process of getting hot water in the house). While I’d expect this to contribute to body odor, we haven’t had too many problems with it. We’re also eating an Equatoguinean diet for the most part. This makes me think it’s just a hygiene thing. I’ve also seen some people picking their nose while walking down the street, so I guess that’s not as frowned upon here…
•   Siesta: Since the island was under Spanish colonization until the late 60s, siesta is a part of the daily schedule. Every day from 1pm to 4pm, most businesses stop, and people go home to sleep or do whatever else they want. Schools also let out at 1pm here; it’s a much shorter school day than ours in America.
•   Speed of life: Efficiency isn’t really stressed here. Things happen when they happen. The concept of a deadline really doesn’t exist. There doesn’t seem to be much of an entrepreneurial, “work hard, get ahead” attitude here; it’s totally normal for people to sleep at work, or for your electrician to just not show up all week. This can get frustrating: service is slow at every restaurant, you’ve got to budget 25 to 30 minutes for the cash register at the grocery store, and you should expect people to show up late to just about everything.
•   Zoning, Infrastructure, Occupational Safety Laws: All a joke. Most likely don’t exist. People build whatever they want, wherever they want, and often just leave huge piles of excess gravel or soil to block an entire sidewalk. Concrete buildings have floors held up with bamboo, there are single power lines held up by trees (outside the city), gaping holes in the sidewalk for stairs leading downward to people’s homes, I’ve seen construction workers using a bunch of nailed together pieces of scrap wood to hold up huge sheet metal fences, and people just have chickens anywhere they want. But the roads are damn near perfect, so there’s that.