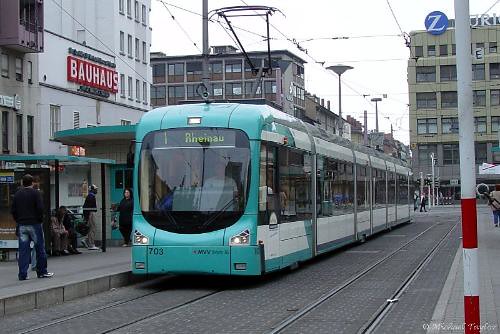 The hierarchy of transportation in Germany is quite different from the one in the U.S. Getting around in Germany is not as straightforward and there are several ways to reach the same destination. To get around Mannheim I usually walk, just like I did at Drexel. My apartment is close to everything I need and nothing is more than a 10 minute walk away. The university is 10 minutes away and things like supermarkets are just around the corner. For people that live slightly outside the center commuting takes form in two ways. The first way is by bicycle. The Germans are big fans of the bike and roads usually have a lane for cyclists. With a bicycle the whole city can be traversed in less than 20 minutes end to end. The other method of transportation in the city is the S-Bahn. The S-Bahn is a network of trams and buses in Mannheim. There are at least a dozen different tram lines that take you anywhere in the city. The trams also link Mannheim to other cities in the Rhine-Neckar region. Cities like Ludwigshafen, Heidelberg, and Bad Durkheim all link up with Mannheim’s S-Bahn. Buses on the other hand only operate within the city and its suburbs.

To get around the region trains are the best method of transportation. The regional trains link up cities to one another and to smaller towns. Using the regional trains also called RE’s will take you to cities like Speyer and Worms. The use of RE’s and the S-Bahn are covered in the VRN ticket. This ticket covers all trains, trams, and buses in the Rhein Neckar region for a semester. To get this ticket you have to go to the government office and present them your enrollment papers from the university. Apparently this semester ticket costs 150 euros but I got mine for free. Despite its price it’s vital to living in Mannheim.

For longer distances trains are still king in Germany. If you want to travel to cities like Hamburg, Brussels, Berlin, Munich, and Paris trains are the fastest and most convenient ways of getting there. The German high speed trains called IC’s and are regarded as the best trains in Europe. That being said IC trains are stupidly expensive. A one way trip to Berlin costs 129 euros from Mannheim. An IC to Frankfurt, a 30 minute ride away, is 30 euros. If you aren’t in a rush, long distance buses are a cheaper alternative. Bus companies connect major German cities for a fraction of the price of an IC train, just don’t expect to get there quickly. I found the best way of traveling is by car. If you are travelling with a group of 3 or 4 renting a car is the cheapest method of transportation. The German highways, called the Autobahn, are nicely paved and have no speed limits. This means that driving at 100 miles an hour is not stressful and more importantly it’s not illegal.