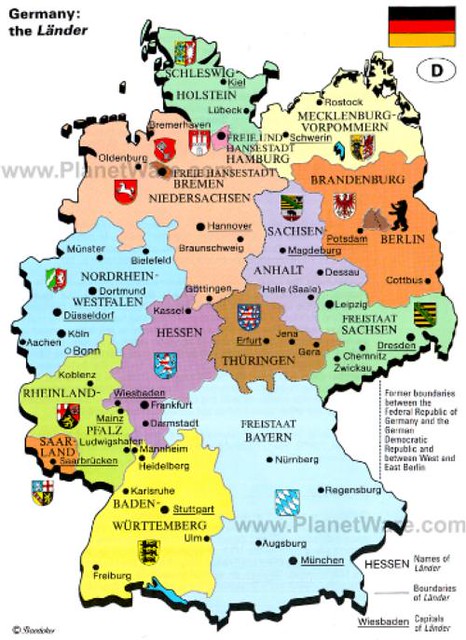 Hallo everyone, and welcome back to my blog. I realize I’m a bit behind on submitting the blogs as I’ve been doing quite a bit of traveling… more on that in another blog post. In this post, I want to talk a little bit more about the city of Mannheim itself, in particular, some of the unique things about Mannheim and just a general impression of the city, now that I have been here for quite a while.

When I would tell people that I was doing a study abroad program in Mannheim, Germany, almost everyone would ask “and where is Mannheim??” or “Is Mannheim Steamroller from there??” I admit I hadn’t heard of it either before I begin searching for study abroad programs in Germany. In the picture attached to this post, you will see a map of Germany, with Mannheim being located in the upper left corner of the yellow state of Baden-Württemberg, one of the 16 federal states of Germany. As you can see on the map Mannheim is very close to the well-known town of Heidelberg, and isn’t too far from Frankfurt and Stuttgart (about a half hour train ride to each with ICE).

One of my favorite things about Mannheim is that it is mostly a regular, working German city. You don’t see many tourists coming to Mannheim, as evidenced by the fact that many people have never heard of it or just aren’t very familiar with Mannheim. Whereas Heidelberg is a very quaint and quintessential German town that is a big tourist spot, Mannheim is just a very nice city to live in, which makes it different from a lot of the bigger cities like Munich or Berlin, which are great cities but also have lots of tourists. Living in Mannheim really gives you a great impression of how Germans really live and go about their daily lives, which is a good experience to have.

Mannheim does have some interesting features, one of which being the Baroque Palace I talked about in an earlier post, which is one of the largest in all of Europe. There are also many nice places to relax outside (particularly with the above average temperatures Germany has been having) with outdoor spaces like the Paradeplatz shopping area, the Wasserturm/Friedrichsplatz water tower, the Marktplatz (market place), and the Luisienpark, a large park containing the TV Communications tower.

Another unique feature of Mannheim is the city center’s layout, which was done in a large grid. This design makes for an organized map of the city center, but at first it can be a bit confusing, as the streets are not named in the way most streets in Germany and the United States are, but are designated with letters and numbers, such as A1, A2, A3, and so on. The easiest way to keep track of where you are going is to know that from the Middle of the Mannheim Palace is where the letters A and L begin, with A1 and L1 being blocks that are right across the street from each other. The numbers radiate outward from there, so that larger numbers are farther away from the middle. The letters continue upwards heading away from the Palace, so that A1, B1, C1, etc. are right along the street that begins across from the castle’s courtyard. The left side of this street has letters A-K (with no I) and the right side has L-U. Here is a good map showing the Quadrate as it is called (quadrant) as I’ve just tried to explain it. http://www.ids-mannheim.de/org/map.jpg
To add to the possible confusion, the buildings on that block are then also numbered, so an address would look something like A1, 6 meaning it is in block A1, and the address is building number 6. It certainly does take some getting used to, but once you do, it is fairly easy to find things within the city center using this system.
Stay tuned for some more blogs! Auf wiedersehen!