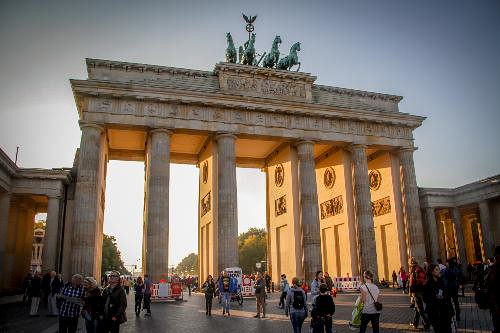 A couple of weeks ago I went to visit Berlin for the weekend with a couple of friends. We planned a pretty packed schedule because we wanted to see as much as possible in the city in just two days. I was excited to visit Berlin because it was a city that I remembered I didn’t like last time I was there. I wanted to see if my view of the city changed for the better. Fortunately, after the trip I can say that I do like the city, unfortunately there was an encounter that dampened my experience in Berlin.

Berlin is a fairly large city and to save as much time as possible we decided to take the trams instead of walking. We woke up at 7 in the morning on the first day so we could make it to a walking tour on the other side of town. Walking was a bit far, so we decided to head to the station and take a tram. In the station the group I was with split from each other trying to find the right tram. One of my friends and I found the right tram and went to the ticket kiosk to buy a ticket. We headed up to the platform and stepped into the tram. The others arrived just in time and didn’t have enough time to buy a ticket. When I realized this I was not too concerned, it was early in the morning and ticket checks on the trams are very rare. As luck would have it though, just seconds after the tram started to move three men approached us and asked for our tickets. At first I thought it was just a joke because these men were not wearing their uniforms, instead they were wearing plain clothes. One of the men approached me and I asked in German to show me some I.D. because I was very skeptical. He produced a card and to avoid confrontation I showed him my ticket. My friend did the same, meanwhile the others who did not have a ticket were being asked for a ticket. After the men realized they didn’t have a ticket they pulled us all off the tram.

One of the men started to tell me that I bought the wrong ticket and wanted to see my passport. He was very rude and arrogant about it. I didn’t feel comfortable giving him such information so I gave him my driving license instead. I thought that all he wanted to do was check my name and then show me what ticket to buy. Instead what he did was he fined me 40 euros for having the wrong ticket. What happened was that me and my friend bought the reduced price version of the ticket. We did this because we thought it was for students. In Mannheim the reduced fare is for kids, students, and seniors, in Berlin it turns out it’s not. The difference in price was only 20 cents and he still fined me. I started to explain to him that we just made a mistake and that the ticket machine was very difficult to understand. In fact it was so hard that when he tried to show us what the right ticket was he couldn’t find it.

Meanwhile the others were being talked to by the third man. In the end the two of us that had tickets were fined 40 euros while the others basically were forced to bribe the man 20 euros each.

The lesson in this, is that in Germany there is no tolerance for rule breaking. Also I learned that being a tourist doesn’t help you, it actually hurts you. I spoke German the whole time so it seemed I was more aware of the situation. The others spoke English and in the end they had to bribe the man because he told them a completely fake story about having to call the police for such an “offense”.

Berlin is a nice city, just don’t step onto the trams without a ticket. (Picture of the Brandenburger Tor, the historical entrance to Berlin)