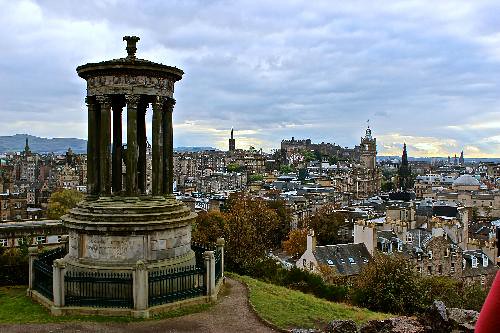 There is too much to do here in Edinburgh. There is so much to do as a tourist or visitor, but there are certain things a tourist must do before leaving.
One of the more beautiful and peaceful tourist attractions to see is Caulton Hill. The hustle and bustle of city life can be quite hectic in Edinburgh. Some days there seems to be too many people crowding the street. It can be difficult to maneuver your way down a single block during rush hour. And some nights there is too much awful noise haunting the late hours, but there is a place where you can escape it all. That place is Caulton Hill.
It is not a very long or steep walk, not at all like Arthur’s Seat, but it is still a great vantage point to see the city in its entirety from. Caulton Hill is also right in the middle of the city of Edinburgh, while Arthur’s Seat is almost around the edges of it. The serene walk up the stone stairs to the top of Caulton Hill is breathtaking in itself. Beautiful trees and flowers surround the ascending staircase. The top of the hill is even more breathtaking. It is a delightfully quiet and peaceful place to be.
There are memorials and old buildings on the top as well. The unfinished memorial commemorating the Scots who died during the Napoleonic war rests atop Caulton Hill. Ironically the memorial is called the National Monument of Scotland and the creation began in the early 1800s, but a lack of funding prevented further building. And never has anyone tried to finish it. The funny looking, Roman inspired monument is a great place to climb up on and take photos from. It is a very tourist-y thing to do and of course I had to do it.
Just around the bend there is another spectacular view of the city. You can see straight down Princes Street and even the Royal Mile. St. Giles Cathedral and the Scottish Monument, also known as the Gothic Rocket, can be seen from this angle. From this angle, you can see Edinburgh at it’s finest. Most of the pictures that come up during an image search of Edinburgh on Google are of this view. Likewise, most of the postcards from Edinburgh are of photos taken from this point. It was amazing seeing this kind of beauty in a city. I do not think that even my hometown, Philadelphia, could look so magnificent from such a high and serene place.