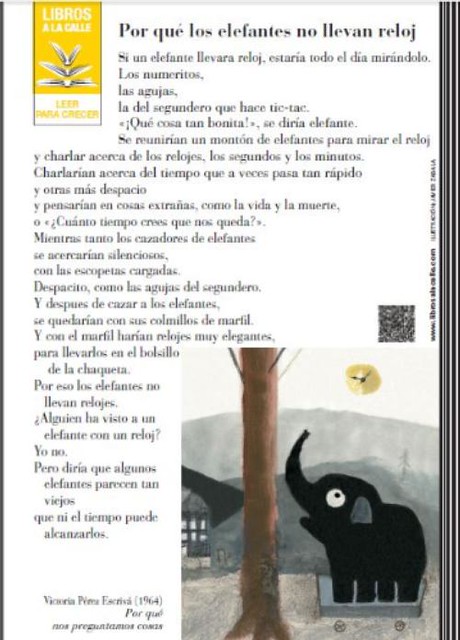 After discussing cultural differences with other international students from the United States, Germany, France, Belgium and other countries, we all agree that time seems to slow down in Madrid for Spaniards but we still feel a sense of urgency. I have had difficulties coping with not being punctual. I have had minor difficulties coping with not being able to have a quick dinner at a restaurant. I have had minor difficulties coping with the Spanish not wanting to entertain me when I would like to put my Spanish speaking skills into practice. At times, I’m completely ignored. Other times, some are understanding and are willing to wait the two to three seconds it takes me to remember how to say a particular word. After finally accepting these cultural differences, I decided to further integrate myself into the Spanish culture.
After my recent discovery of the presence and purpose of the Bibliometros in popular metro stations, when I saw the poem “Por qué los elefantes no llevan reloj” posted near a window on a train I thought it was a part of the Biblometro initiative I was also surprised by Madrid’s effort to entertain train passengers. It was evident that the poem was just a page of a book. At the bottom, “Libros a la calle” was written, which meant it was separate from the Bilbliometro cause. I was already impressed by the Bibliometro idea; thus, I was surprised there is another project with the same idea to provide free books to the public in response to how the economic crisis negatively impacted many.
I made the effort to move closer to the poem and I read it. I wonder if the passengers often read the poem. The message of the poem encourages people to not be too concerned with time because it interferes with enjoying life. It reminded of the frustrations I experienced, that is mentioned earlier in this blog. I find it impossible for Spaniards to be in a hurry. I’m surprised but utterly glad when I’m trying to catch an approaching train and others are running down the steps in the metro stations as well. I’ve missed several trains because of those who decided to stand around or in front of the steps or escalators when the train is approaching.
Moreover, the central idea that I gathered from the poem explains the frustrations I was having. After reading the poem, I have gained a better understanding of Spanish culture. Ironically, this was already stated to all international students during the orientation days. This is evidence that I need to experience the cultural differences in order to better understand them. Thus, I’m happy to have had those experiences.