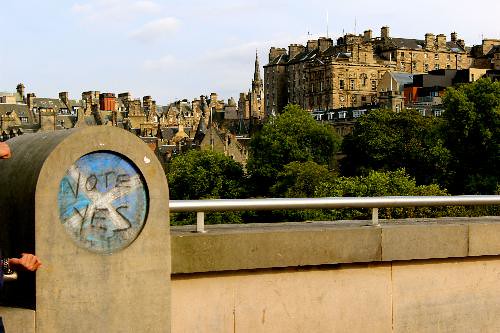 Even after the referendum on September eighteenth, the Scottish people who were hoping for a Yes vote continue to hope for independence. People everywhere are still wearing their Yes pins to show support. They have not given up yet. Many people are still campaigning, educating the other people as to why independence is necessary for Scotland still. They also are educating people on how they can achieve indepedence in the future.
I attended an event, which was part of the Independent and Radical Book Fair last night, and three authors who wrote about their visions of a free Scotland spoke before a crowd. They all were pretty significant figures during the Yes campaign back in September and it was inspiring to see that none of them have yet given up. Again, just like in the early months leading up to the vote, they chanted about freedom. They chanted that Westminster was neglecting or ignoring Scotland’s wishes and threatened Scotland into voting No. They chanted that devolution was not enough for Scotland, but that they wanted full power of Scotland. They had the crowd going.
One of the more touching stories I heard that night was from a woman who wrote the book Blossom, a book outlining where Scotland could be if it were independent from England. She said she had seen an elderly woman the day after the referendum results were known. The elderly woman took her Yes pin off her coat and handed it to a young gentleman saying, “I won’t see it in my day, but you will”. Everyone in the room held that kind of thinking that night, that independence was inevitable. I can feel that the hope for freedom has not yet run out.
Even though the results of the vote were a No, a movement was created. A definitive movement and creation of ideas of freedom were created within Scotland. That movement sent a clear message to England, who responded quite badly to it, threatening the loss of Scottish people’s pensions or jobs if they voted Yes. The movement scared England.
That movement can never be forgotten or dismissed. It changed Scotland and its people forever. You can see that that movement still runs through the culture here quite freely. The thought and hope for freedom is not one that can be easily broken. It is obvious that while many people were disappointed by the No vote on September eighteenth, their spirits were not broken. Today, after the fact, the Scottish people are still fighting for independence and I don’t think that that fight or movement will die quickly.