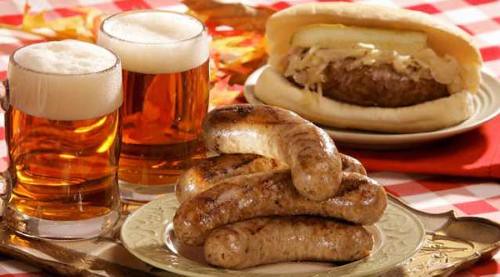 I have been here in Germany for over 2 months now. The reality is sinking in that I am over half way done my time here and I’m already know I’m going to miss this place a lot. For this post I’m going to list some great Germany foods I’ve discovered during my stay so far that I know I will miss. My next post later this week will list some other aspects of this great Country I will miss.

Döner
Döner is a magical cuisine here in Germany. It was brought over to Berlin by the Turkish in the 1970’s and developed into the widely popular meal Germany knows today. It is similar to Greek gyro in appearance but the ingredients are different. Döner is made with a shredded pork meat, a special Turkish yogurt sauce, cabbage, lettuce onion and tomato. Whew it’s delicious and is a must-try (multiple times) while in Germany. Don’t get one in France, they put french fries in it and it’s just not the same.

Wurst
Germany may be most famous for its Bratwurst cuisine but there is a whole world of great Wurst (sausage) products here that are underrated abroad. First of all, Bratwurst is traditionally just a German sausage on a roll with your topping of choice. Currywurst is another great food, where they cut up the sausage and then top it with a delicious curry sauce. Often they will give you a roll with it as well. And finally the Bavarian Weiswurst. It’s a white sausage with a skin which you must first remove in order to eat it. But don’t let it deter you from this classic meal. What makes it all worth it is the sweet Bavarian mustard that compliments it perfectly.

Beer
Not only is German beer delicious but is much cheaper than American beers. Their two main specialties are Weizenbier (Wheat Beer) and Pils. Although there is not a lot of variation in German beer, the experience curve effect not only minimizes their pricing but maximizes their skill of making delicious beer. Additionally there is a government law, translating roughly to The German Purity Law, which restricts the brewing of German beer to a few key ingredients. And although that minimizes variation, they do what they do better than anyone.

Candy
Germany has a great assortment of candies here most notably Haribo Gummi-Bears. I have consumed an ungodly amount of them while I’ve been here, not only because they are delicious but also super cheap. Germany also has a quality selection of chocolates such as Lindt (it’s Swiss but much more common here than back home), and Ritter Sport Schokolade. Long story short, get candy while in Germany.