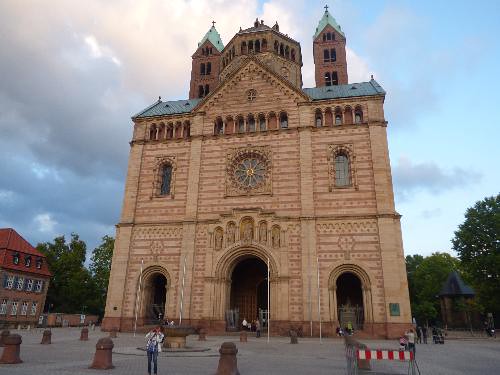 Welcome back to another blog post. In this post, I want to talk a bit about the region that Mannheim is in, and about some of the other places nearby that are a short and easy visit to make. One of the great things about studying abroad, especially in Europe is the ability to visit places you might not otherwise have a chance to visit. In Europe this is especially easy to do, since you can travel all over by train and reach destinations much quicker than driving.

Mannheim is conveniently located within the Rhein Neckar region Germany, putting it within a short distance of many other notable places in Germany to visit. As I explained in an earlier blog post, the rail system here can really get you just about anywhere you want to go, even to small towns that you wouldn’t think have access to public transportation are accessible. With the VRN Semester Ticket, which costs about 150 Euros, you get a stamp on your student ID card (the ecUM card as it is called), which allows you to travel anywhere within the VRN (Verkehrsbund Rhein-Neckar, or Transport Region of the Rhein Neckar) region, which covers the surrounding area of Mannheim.

The Rhein Neckar region (named after the Rhein river and Neckar river, both of which converge at Mannheim) of Germany lies between the Frankfurt and Stuttgart metropolitan regions, and as I explained in an earlier blog post, is well connected to these two major metropolitan areas of Germany. But the Rhein Neckar region itself is an important metropolitan area within Germany, with many important cities both culturally and economically. Mannheim is the largest city in this region, with over 320,000 residents. Other major cities in this region include Ludwigshafen, which is right across the river from Mannheim, and is integrated into the tram system, so it is easy to travel between the two cities, in fact, some students I know live in Ludwigshafen and then take the tram over to Mannheim for class at the university.

One of the other famous cities in the Rhein Neckar region is Heidelberg, which is well-known for its picturesque location on the Neckar River and its really nice old town area and large castle sitting up on a hill overlooking the city. Heidelberg is a short (15-20 min) train ride away from Mannheim, and it is well worth visiting a few times as I have since it is so close by.

Speyer is another one of my favorite cities nearby, again only about a 25 or 30 minute train ride away. Speyer also has a really nice Altstadt (“Old City”) with old houses and nice architecture. The Speyer Kaiserdom (Imperial Cathedral) is an impressive sight. About a 10 minute walk from the Cathedral and Altstadt is a unique museum, the Speyer Technik (Technical) museum which has a ton of old cars, trucks, trains and airplanes, including a Boeing 747 towering over the museum. (The sister museum to this is located about an hour from Mannheim in Sinsheim, still within the VRN region).

Worms (pronounced Vorms) is also worth a visit, as it also has a large and impressive Cathedral building, and again is a short train ride away.

All of this goes to say that while it is certainly lots of fun to visit places that are a bit farther away such as Paris (3 hours or so by TGV/ICE train), Basel & Zurich Switzerland (2.5 hours by ICE) or Munich (3 hours by ICE), there are tons of places right near Mannheim that are well worth a visit especially when spending an extended amount of time here such as the Semester Abroad. While Mannheim, Ludwigshafen, Speyer, Worms are not top tourist destinations in Germany, they are all unique cities that don’t cost you any extra to visit with the Semester Ticket, which makes it a really great idea to visit them.

That’s all for now, I’ll leave you with a picture of the Kaiserdom of Speyer. Auf wiedersehen!