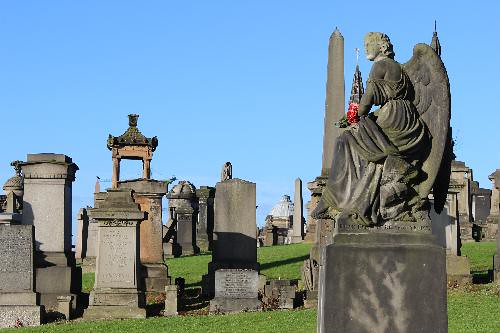 Glasgow is the largest city in all of Scotland population wise. It is also the most modern, especially when compared next to the old city of Edinburgh. While Edinburgh has beautiful old, limestone buildings, Glasgow has more modern architectural buidlings made from more recently used materials. Glasgow overall has a more city vibe. Edinburgh is a posh town and consist mostly of people from out of Edinburgh. Glasgow is more established as a locals city. While I was there for a class trip I saw the old town center, where the Glasgow Cathedral dating back from the 14th century was. Across from the magnificent catherdral was an old cemetery with gravestones dating back from the 17th century. The cemetery and catherdral alike were magnificent. The church was adorned with beautiful and stunning stained glass. One window that struck me in particular was one that depicted Adam and Eve. Both of the figures were purple, a strange but beautiful color to have them in. The art throughout the church was deifinetly from the gothic period. I was always a little scared of churches for some reason when I was younger. I was afraid of the massive size of them, the dark art depicting Jesus brutally dying on the cross, and how old they felt on the inside. Only until I took an art history class did I learn to appreciate the work that went into decorating and building churches. The Glasgow Cathedral reminded me of one of the Gothic churches I leanred about during my art history class. I truly was amazed by all the art. What was once a place of fear for me was now a place of admiration. I felt overwhelmingly peaceful in the church.
Another place I felt completely calm in was the cemetery across the cathedral. It was such an old cemetery. I saw graves dating back to 1804. I tried to think back to that time. That time was before the Civil War, before my family emigrated from Ireland to America, and before women had the right to vote. I still couldn’t imagine how life was like then, especially for Scottish people. I tried to put myself in their shoes and could not. I saw too many graves where children were buried. Even after seeing those graves I could not imagine the kind of hurt the parents must have felt. I wondered why I felt so peaceful in that kind of place, where the young and old were buried, where so many have mourned. I still have no answer.