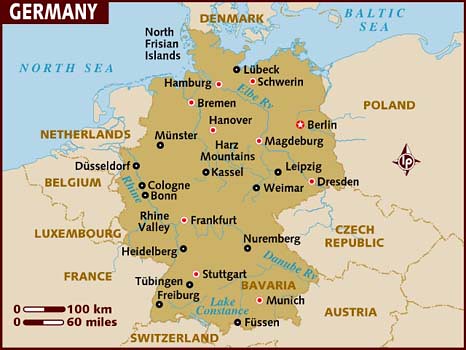 Overview
Germany is country in west-central Europe, known as the most populous member state of the European Union and its most powerful economic force. It is also the second most popular migration destination in the world. The country’s motto is “Einigkeit und Recht und Freiheit” which in English translates to “Unity and Justice and Freedom”.

Economy
Today, Germany is the economic powerhouse, boasting the largest and most powerful national economy in Europe. Ever hear of Volkswagen? It pulls in 197 billion Euro in revenue as of 2013 and has over 500,000 employees worldwide. Germany gets an edgethrough its unique approach to industry, investing more in their employees for the company’s long-term vision. Back in 2008 during the global financial crisis, instead of laying off employees, a German program allowed companies to keep their employees on part-time and continue to be trained while also supplementing their reduced salary. This allowed the companies to come back in full swing when the recession was over. Another factor in Germany’s economic success is their expert craftsmanship of highly specialized parts. German’s like to say “We make the thing that goes inside the thing that goes inside the thing.” For example, the German company Herrenknecht makes a 1 million euro tunnel drilling machines They are also collectively geared towards international markets. The German workforce makes up only 1% of the world’s total workforce but produces 10% of its exports.

Science & Technology
Germany is home to some of the world’s oldest Universities. It is no surprise that they have consistently been a world leader in scientific discoveries and engineering innovation. Albert Einstein, the world-renown physics hero, was a German. He paved the way for modern physics with his theoretical works on atomic structure and energy to name just a few. Today, the German’s still pave the way in innovation. For example, SMErobtitics is currently working on a project to create simple and intuitive artificial intelligence machines that reject the use of complex programmed algorithms. Instead, the project hopes to create robots that have a robust skill set and can learn from humans with minimal effort, allowing quick adaptations to process changes. Germany shows no signs of slowing down their hard work in the field of science and tech.

Politics
The current German political system was established in the Grundgesetz, the constitutional document approved by the Allied Forces after World War II. It established Germany as a federal, parliamentary, representative democratic republic. In this form, the president carries out representative duty while more executive duties are carried out by the head of government, known here as the Chancellor. Today, the Chancellor of Germany is Angela Merkel. She is a former research scientist and the leader of the Christian Democratic Union in Germany. Also notable, she is the first woman to become Chancellor of Germany and the first Chancellor born after World War II. In 2014, Forbes named Merkel the #1 most powerful woman in the world.

German undoubtedly has an exciting future ahead of itself.