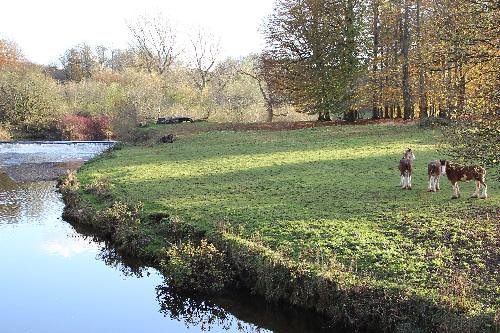 When I think of Glasgow, I think of a booming Scottish city. I picture factories and the remains of what was once an industrial hub. I picture an enormous amount of musicians playing in the street and an incomparable type of culture to Edinburgh. I see more working class people in Glasgow than in Edinburgh and with that, more modern buildings that are less than posh. Unlike Edinburgh, Glasgow has ghettos and slums. With that comes a different kind of people and city all together. I still believe Glasgow is beautiful though. It is still an industry driven city bursting with character and music. But when I think of Glasgow, the last thing to come to mind is a spectacular park like the one I saw.
Pollock Park sits on the outskirts of Glasgow and is amazingly stunning. The true and natural beauty of Scotland is all right there in that park. I got lost in some of the maze like trails because it was so big. I felt as if I entered a magical realm where faeries or sprites were real. One tree in particular was giving off some sort of energy to me. It was a dark, deeply twisted tree with gnarled branches reaching out in all directions. It was a short, but wide tree perfect for climbing. There was also a beautiful floral arrangement on the lawn of the groundskeeper’s house. The only way I can describe it is like an Alice in Wonderland setting, where the queen plays croquet. I felt like I was in a storybook, so far from reality and civilization. It was hard to believe that feeling. Glasgow is such a modern city that I could not come to terms with how otherworldly Pollock Park was.
Along with seeing some beautiful flowers, I saw some dinosaurs. That part of the park really brought out the little kid in me. Huge dinosaur casings and fake bones were scattered, buried beneath the sand lying under tropical plants. I did of course get to see real animals on the trip. I saw the famous Clydesdale horses Scotland is known best for. Those horses are even larger than normal horses and are used for labor. One kind gentleman explained that they are not used for riding, but for pulling carriages mostly. It was a bit sad to hear that, though, because the horses were so beautiful. I wanted to ride them so badly. Their tails and hooves were adorned with long, flowing hair. Their manes were stunning too. I’ve only ever seen a Clydesdale horse in center city Philadelphia, pulling carriages for tourists, and in the movie Brave. To see one up close was great, but a little frightening because of how big they were. Again, after seeing those horses I could not believe I was still in Glasgow.
My trip to Glasgow definitely turned my initial assumption of the city on its head