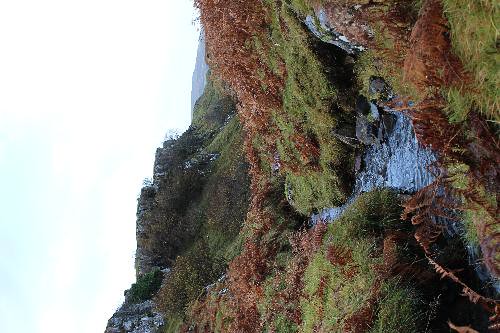 The Isle of Skye is the most beautiful place in the world. I have never travelled outside of East Coast U.S before coming to Scotland, but I am sure of it. The Highlands in general are a glorious sight to see. I still cannot believe Peter Jackson for choosing New Zealand to shoot Lord of Rings at. The Highlands are definitely Middle Earth, no questions asked. I believe I have said it before, but the rolling hills and combination of colors are fantastic. The Highlands seem like another world all together. I was more than happy during my three-day tour of the Isle over the weekend.
In a little van driven by a man wearing a skirt, our tour group left Edinburgh on Friday morning. We drove a long time through the hills and mountains of the Highlands before arriving to the small island of Skye at night. The Isle of Skye is different from the rest of the Highlands only because it is a very productive fisher community. The town we stayed at looked more like a beach resort, resting on the banks of a lake, than what we all would imagine the Highlands to look like. Our van drove off on Saturday to show us the rest of Skye. It was beautiful. We passed a river where the so-called Cuillin Mountains were named after. Our tour guide, a man by the name of Graeme, told us the old Gaelic story of how the mountains were created and why the river we stood along while we listened to him was so significant. Long story short, a love story happened by the river and eternal beauty is granted to those who dip their faces in it. Naturally, I dipped my face in the cold water believing every bit of magic it offered was true.
Another magical place we visited was the Faerie Glen. In the Glen, stones were mysteriously placed in a perfect spiral. Rowan trees, trees that bring good luck and safety to those who pass it, surrounded the area. It was surreal to say the least. After lunch, we hiked up the picturesque Old Man of Storr, a mountain left by the volcanic activity that Scotland faced millions of years ago.
I felt like I was part of the land. My family can trace themselves back to the Anderson clan of the Highlands. That could have been the reason why I felt so spiritually connected to the land. Aside from beauty and old Celtic superstitions, the Highlands also hold a bit a history. We learned about the tragic massacre at Glen Coe and the genocidal Highland Clearances. It was very interesting to hear these stories from our tour guide, a native of the Highlands and also a member of the Anderson clan ironically. I learned about those topics in history class, but never heard them from a Highlander’s point of view. He was not careful at all about how he harshly spoke about landlords or the Campells. He was very convicted in his storytelling and his tone was bitter when speaking about the sad history the Highlanders once faced. I could hear his connection to the land. From that, the pride of my heritage I had only grown. I wished I could have stayed longer in Skye to try and imagine how my ancestors of the Anderson clan lived in the misty glens of the Highland coast.
But I couldn’t stay any longer and had to leave the next day on Sunday back to Edinburgh. All I have now are pictures and memories I hopefully will never forget.