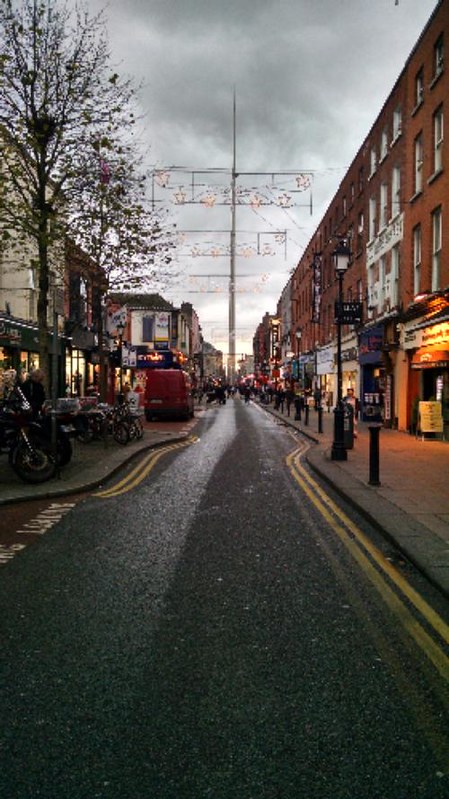 Dublin, a place I recently visited, is said to have a beautiful Christmas market opening up to the public around the end of November. I did not have the chance to see it yet. Only a sparse amount of light pole decorations and street signs were hung to celebrate the festive holiday. I was surprised to see that all the signs hung over the streets were in Gaelic. It was great to see that Ireland has kept it’s native language, especially because Gaelic was once a dying language. The English outlawed it and forced primary schools to only teach English to the students. Because of this, Ireland nearly lost part of its heritage, part of its identity. Luckily, around the time of the Easter Risings and early twentieth century, Gaelic was reintroduced into special schools. Gaelic had seen a rise in popularity and usage again. I was so glad to see that the tradition of using the mother tongue has not been lost, and contrarily, has been flourishing in the cities. I wish I spoke Gaelic or at least understood a minor part of it so I could read the signs, although I bet the signs were just wishing people a happy Christmas.
The use of Gaelic is not as common in Edinburgh as it is in Dublin or Ireland. For one thing, they are different languages. Scottish Gaelic is different from Irish Gaelic, most commonly referred to as simply Irish. There are few signs scattered around Edinburgh in Scottish Gaelic. Most of these signs are around the newly constructed Parliament building. I saw quite a bit of Gaelic used in the street signs in the Highlands, where the Gael culture is livelier than in the Lowlands, like Edinburgh. I assumed it would be the same in Ireland for some reason. I assumed that the countryside of Ireland or the rural areas would have Gaelic signs and speakers, not so much in the large cities like Dublin. It was a very exciting surprise to see that even in the urban developments that the Gaelic language thrives. I wish Edinburgh were more like Dublin in that fact. Although Dublin is beautiful around Christmas, so is Edinburgh. The single thing that I believe Dublin has beaten Edinburgh, is with its use of the old Gaelic language. I’ve heard common people in Dublin speak it fluently, while only educated men have spoken Gaelic in Scotland. I think language is important to national identity. Maybe the reason Ireland has more of a bond to the old language, unlike in Scotland, is because of it’s break from the U.K. Either way, it is not Christmas yet in Edinburgh and I might just see a few Gaelic signs or traditions during Edinburgh’s huge Christmas festival.