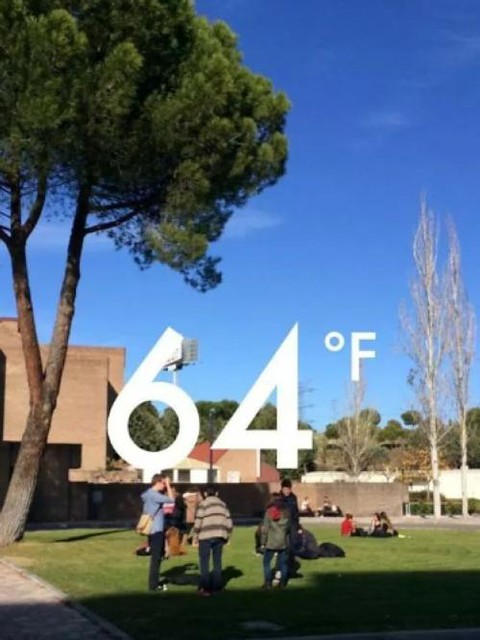 I took a picture of my classmates enjoying the sun before our next class Thursday afternoon. Though the temperature is dropping and the sun comes out much later than when I first arrived in late August, it was mostly in the high 60s this week with the nights being in the low and mid 60s. Some days were in the low 70s during the day. Overall, the temperature in Madrid is great! Though I miss witnessing the festivities with my family, I do not miss attending class in the cold weather. I can only imagine how cold it is in Philadelphia during this time. Additionally, I can imagine how cold it is getting at home in Maryland.

The green field in the photo is the divider between the two buildings that make up the campus. The building in view is the called the Old Building and I was walking from the New Building which is named because it was recently built. Most days when students are leaving the New Building, they opt to stop and sit on the grass and talk about weekend plans and/or possible upcoming travel plans.

Despite the recent great weather, just last week it was the low 50s and the mornings were brutal. It was also raining, which caused it to feel colder than it actually was. However, that did not stop students from casually finding a spot on the green grass to sit and talk until their next class. It is entertaining to watch Spaniards react to rain. Last week, it rained unexpectedly. It was too cold in my opinion to pass the time sitting outside; thus, I decided to sit in the cafeteria. It was pretty full that day. Then, suddenly it started to downpour and the cafeteria became silent. There is a wall that entirely made of slide doors; thus, students can see outdoors. I remember the Spaniards staring outside for what seemed like a long period of time, the cafeteria workers included. The other international students and I silently laughed at them.

Though I will miss Thanksgiving for my first time, I am certain that the warm weather would help lessen my sadness. I have one other American roommate who will return home to celebrate the holiday. My other roommates are other European students but are aware of the American holiday and have decided to help me celebrate it! I’m excited to celebrate the holiday with them and share the meaning behind it.