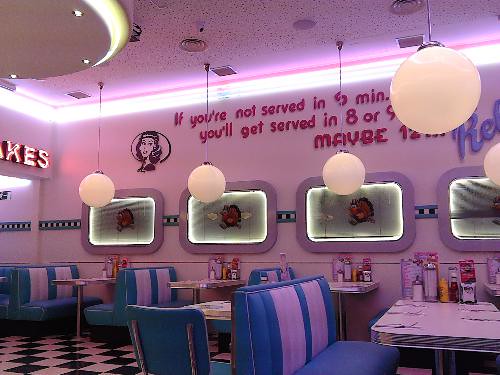 I decided to write about the point of view of Spaniards have of Thanksgiving because it was something I did not think they thought much about but I suppose because there is a plethora of shops and restaurants dedicated to the American cuisine and lifestyle, it makes sense that the city would have an opinion about the holiday and publicly display characteristics of it.
A part from classmates and professors asking me what the holiday is, I have seen the use of turkeys in windows of shops and the use of the term “Black Friday Sales.” The photo for this blog post is of turkeys displayed in an American themed diner. I dined at this particular diner before in early September, near the time I first arrived in Madrid. I discovered it accidentally and decided to test how accurately it portrays an American diner. I recently dined at the same restaurant because one of my European roommates unexpectedly developed an interest in learning about American culture. When we entered, we were both surprised to see turkeys displayed in the windows. I wonder if there are American flags in the displays windows for Fourth of July or Santa Clause for the Christmas holiday.
Regarding Black Friday sales, ironically enough, the sales are being offered the same day as in the United States this year, Friday, November 28th. The offers that are being advertised are not of the same kind as in the United States. I have noticed that the sales are highly focused on offering discounts on clothes, which I consider to be a normal occurrence. Clothing stores offer discounts often throughout the year. However, I did not see many Black Friday sales for electronics, such as, TVs, game consoles, and laptops, which is considered the heart of the Black Friday sales. I would not consider Black Friday a day without major discounts on electronics. Nonetheless, I am looking forward to the day to experience what Black Friday may be like in Madrid. I do think the same behavior exists in Madrid. It is difficult to at times keep one’s composure when there are great deals; however, I doubt that people are willing to sleep outside shops in order to be the a part of the first crowd of people able to take advantage of the sales. I think that would be very silly of them to do because, again, the sales are seemingly mostly for clothes.