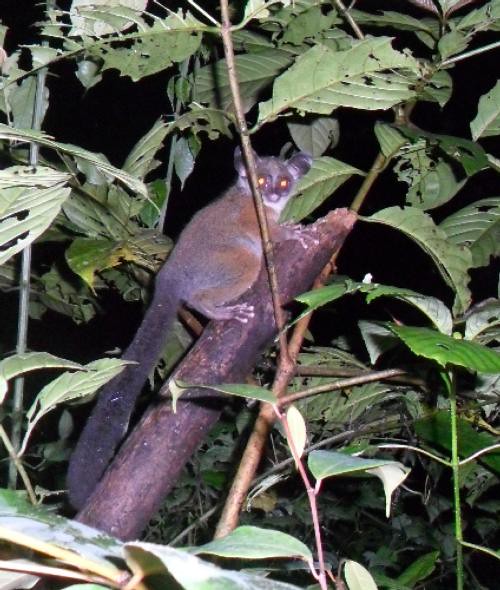 I figured I’d spend a bit more time describing the animals I’ve run into at night, since nocturnal animals don’t always get as much attention and most of my time in the forest has been spent at night.
-Grasshoppers: I’ve seen a pretty incredible variety of grasshoppers or grasshopper-like bugs. I’ve seen some with black and fluorescent orange stripes that are about 2 inches long. I’ve also seen some brown ones that are about 3 inches long with legs that extend about 2 inches behind the end of their torso. And at the end of this creature’s torso is a large curved spike. Horrifying. But we’ve also seen some really cool ones that look like leaves and definitely can’t impale a human hand.
-Caterpillars: I’ve seen all sorts of caterpillars. Bright yellow and black striped ones with papery spikes coming off of them, wooly white ones that clump together in groups, maroon and black ones with little mohawks, and all other sorts of funky looking caterpillars
-Spiders: As much as spiders can be pretty scary, I’ve seen an incredible variety of them. Some are tiny (maybe a centimeter) and some are 3 or 4 inches (including the legs). Sometimes they’re normal brown or black colors, but sometimes they’re incredible shades of bright green, red, or yellow. None of the spiders on this island are particularly dangerous, so with that in mind they’re pretty awesome.
-Moths: I’ve seen all sorts of moths that so identically resemble leaves that you could step on them without noticing. Some look like dead leaves, some look like living ones, some look like broken ones. Others just looked like big puffballs. While wearing headlamp though, quite a few of them got in my face. I found myself swatting at them and welcoming the bats to come swooping past my face to catch them.
-Bats: It was pretty incredible: You’d have one of those moths bothering you for a minute or two and then WSHHH! a bat would fly within a few inches of your face and you’d hear the clicking of its echolocation fade away into the darkness. There were points along some of the trails where there where huge communities of them flapping around between a bunch of trees, which is pretty cool to see when backlit by the moon and a clear sky with more stars than you’ll see in most areas of the US.
-Duikers: Pronounced “dykers,” these are little forest antelopes. They’re pretty cute, and apparently pretty stupid. They’re hunted in the bushmeat market here, but the one we came across didn’t run away from us until after about 5 full minutes of us staring at it, taking pictures, and whispering all while we were within about 6 feet of it.
-Galagos- Definitely the most interesting animal to come across in the middle of the night were the galagos. These are adorable primates which, as I’ve probably mentioned before, you typically notice first by either the sound of them screeching or their eyes glowing. This is typically followed by a bunc h of rustling in the trees. But they’re generally pretty inquisitive, so they tend to either try to get closer to you or not run too quickly. These bushy little big eyed animals were definitely the highlight of my night time surveys.