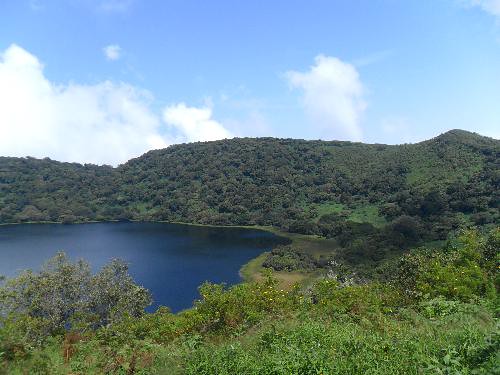 On Tuesday, we hiked to Lago Biao, the crater lake at Pico Biao, the second highest peak on the island. Pico Biao is the top of one of the island’s extinct volcanoes, and it’s a long, steep hike to the top. We all piled into the bed of a pickup truck owned by one of the farmers who lives at the Moka field center and got a ride down the road to the beginning of the trail. This hike was intended to begin at around 8:30 am–and that detail is important because had that actually happened our shirts probably wouldn’t all have been completely saturated with sweat by the time we’d reached the top. But since Drew and some of the students were staying by the lake for a day or two to do some bird research and needed to transport tents and supplies, they’d hired some locals (referred to as porters) to carry the extra equipment. And because everything here just happens when it happens, the porters didn’t show up until about 9:30 and we didn’t get on the trail until about 10. This made a HUGE difference. The fact that it was a perfectly clear day made the trip FAR more beautiful but also made it all the more exhausting because of the sunlight.
So we began up a dirt road, wearing our field clothing and carrying backpacks with little other than water maybe a little food, and playing the alphabet game. I’m very glad I brought some bread. We began at a pretty quick pace, but within 20 minutes or so our group was starting to fall apart, as was our alphabet game. We were hiking up the side of a mountain, the steepest part as a matter of fact, just as the sun was starting to really beat down on the hillside. And of course, we weren’t on the side of the mountain that’s shadowed in the morning. So our calves and thighs were burning and we were drinking water at every opportunity. Apparently those that decided to take it easy and purposely fell behind had a pretty pleasant hike, but the rest of us got a pretty killer workout.
Once we were at the top, we were instantly reminded of why this was worth it. We were looking out over a gorgeous, reflective, and seemingly undisturbed lake at the top of a mountain while some wisps of clouds churned down below us. I climbed up a little tree to get a better view. It was all breathtaking. Once the others had caught up, we walked our way down the inside of the crater. This trail was very poorly maintenance–we were scraping past vegetation the whole way through. And we had the incredible luck to find ants along at least 50% of the trail. Once we’d made it down to the bottom of the lake, though, we forgot all about the ants. We found ourselves at the mouth of a little stream that exited the lake and formed a waterfall, one which we could actually stand in the water at the very edge of. It wasn’t a huge waterfall, maybe 30 feet or so, but it was apparently the first of a few. Either way, it was absolutely gorgeous. After spending a half hour or so down there and filling up our water bottles in the stream (we used our iodine tablets to purify it), we headed back. By the time we’d finally made it back to town, we were incredibly exhausted and ready to eat some of the local food in one of the restaurants in Moka. It was the right way to end the trip.