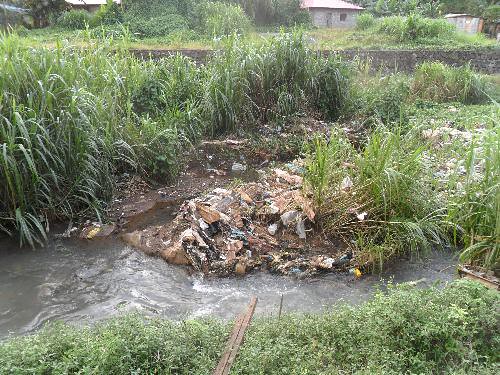 Today we walked along a river named Consul in Malabo as a field trip for our Society & Environment class. The reason for this is its pollution. People talk about the Schuylkill and the Hudson and the Potomac being nasty, but this is a COMPLETELY different level. In most parts, the river bank is made up entirely of trash. Apparently, this river is where most residents of the surrounding neighborhood, Sumco, come to wash their clothing, bathe, and get drinking water. And its banks are made up of trash. All sorts of trash too: paper, clothing, plastic, oil cans, sheet metal, wood, and anything else that can possibly be thrown out here. We walked along a path following it for a while, taking in all the sights and smells. It was absolutely disgusting.
Because our teacher hadn’t actually done this field trip before, he was unaware that much of the path along this river goes through a “residential” area in which many of the locals have set up houses. These houses are, for the most part, wooden shacks with seemingly no electricity and definitely no running water. We walked past many people bathing in the water and some washing their clothes. There were small children running around everywhere–in fact most of the people we saw were small children. Most of these children were only partially clothed; some with no top, some with no bottom, and we even saw a little girl wearing a bag as a top with underwear on bottom even though she was probably still at diaper age. We also saw completely naked children. Overall, the children were absolutely delighted to see us walking along their path/through their yards/in between their houses, and maybe two thirds of the adults were pleasant. We were greeted by cries of “Chinos!” and smiling waves from children and a pleasant “Buenas tardes” from most of the adults.
But this was all rather strange to me. While the point of the trip was for it to be a river walk, it transformed pretty quickly into a field trip through an area of extreme poverty. Again, this was completely unintentional. But ultimately, it kind of felt like a bunch of Americans visiting a town of the utmost poverty as a tourist attraction. While I think coming face to face with this kind of lifestyle is a valuable experience in terms of personal growth, being there without having a particular reason doesn’t seem like the best way to gain that experience. I chose not to take any pictures of the ‘neighborhood’ to respect the privacy of the residents (even though it was pretty clear that privacy wasn’t really a thing there). It’s a place that made me want to do something to help, but also made me think about the fact that I should take advantage of all my privileges because to do otherwise would be a disservice to those who don’t have such opportunities. But it also made me think of how little we actually need to get by, and that aiming to not be wasteful (and to not just throw your trash everywhere) is also incredibly important.