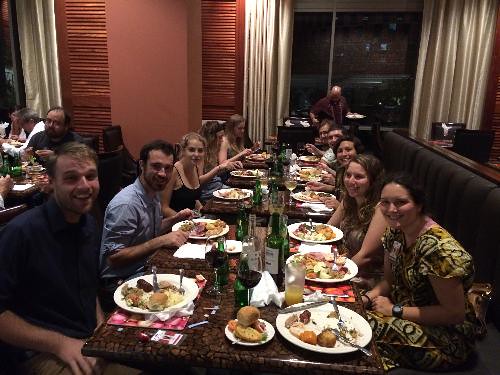 Since we’re in a country that isn’t America, Thanksgiving is not commonly celebrated here. So we were looking for a way to celebrate this holiday in spite of that, but, needless to say, it wasn’t simple. We considered going to a few different places and ordering a bunch of chicken. We also considered ordering food at separate places and bringing it back to the house to have a more family-style meal. But neither of these options included the traditional selection of food items found at an American celebration. Luckily, we had a third option. But let me back up a bit to explain that one.
While I was up at Moka helping with outreach, I met a lawyer working for the company Noble Energy, which does quite a bit of work here in Equatorial Guinea (they had also helped organize the outreach event, having bussed out a group of school children). We talked for a while, and she told me that they have barbecues every weekend at their compound (most oil companies have VERY nice compounds where all of their employs live and often dine). These barbecues include an all-you-can-eat buffet of steak, ribs, cooked vegetables, soup, baked potatoes, salad, and all other sorts of awesome food. In the past, they’d apparently had our students over, and she extended the invitation to our group as well. So a few weeks ago, we went to one of those. We stuffed ourselves with great food and played billiards and darts and it was awesome.
But our fantastic RD, David, go us invited to Thanksgiving there, and this was an entirely different thing.     Instead of eating in an informal bar area, we sat in a gorgeous dining room. There was still a buffet, but this time it was a buffet with turkey, ham, red snapper, cranberry sauce, baked potatoes, sweet potatoes, mashed potatoes, cooked vegetables, and collard greens. This buffet was accompanied by an appetizer buffet with salad, potato salad, pasta salad, smoked salmon, shrimp, fancy breads and cheeses, and duck pate. We were served red and white wine and had access to tea, coffee, and a wide variety of sodas. There was also a buffet table with a wide variety of cakes and the occasional slice of pumpkin pie.
So naturally, we stuffed ourselves. We ate until we couldn’t eat anymore. Personally, I made a point to have at least a little bit of everything in the entree section. All the food was of incredible quality and absolutely delicious. We had a very nice “family” dinner with fun conversations and great food.
But to be perfectly honest, something about it seemed a bit strange to me. Here we were, in a country where we’d just a day or two before seen the most extreme degree of poverty, stuffing our faces with lavish food. The company has a lot of money with which it contributes a great deal to this nation, and you can’t blame them for feeding their hard-working employees well. But that juxtaposition once again made me realize my position of privilege. And with this hard slap in the face, I became adamantly determined to in some make charitable contributions on Thanksgiving whenever I can. In the past, I’ve contributed to food drives and other charity events, but essentially only when it’s been convenient for me. But if I can afford to be gluttonous for the sake of a holiday, I can afford to help and absolutely should help others in need, whether or not they’re celebrating Thanksgiving. And personally, I think it adds something greater and more significant to this holiday.