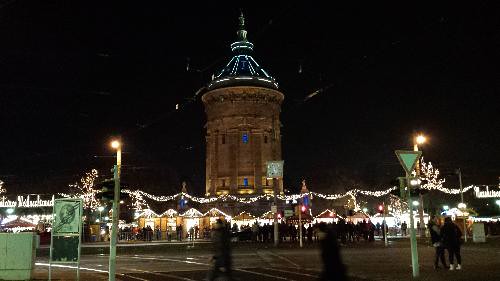 It’s the time of year where the holidays are in full swing. Unfortunately, Thanksgiving isn’t a holiday in Germany but they redeem themselves in the weeks leading up to Christmas. The start of the advent marks the openings of countless christmas markets all across the nation. These “Weihnachtsmarkt” as they are called in German are open from late November until christmas eve. They are very popular and every German city has their own. The biggest of course are in cities with a big population but no matter where you are in Germany you are bound to find these markets in the center square of cities and towns. Mannheim has a pretty decent sized christmas market. The market is split into three locations, one being in the center square, one on the main street, and one around the water tower.

These markets date back to the late middle ages in Germany. Although, a typical German institution, these christmas markets have spread to other countries in Europe and also to countries such as Japan and the United States. In fact Philadelphia has their own version of a Weihnachtsmarkt.

Stalls at a Weihnachtsmarkt sell food and drinks. The most popular drink is Gluhwein, which is hot mulled wine. This is the what you drink during the season. In fact it was hard to find someone without a cup of gluhwein in hand. Seeing that it was so popular I decided to have a cup myself. The first thing that got to me was the smell, but the taste was even worse. Honestly it tastes like hot wine with melted down christmas decorations. I thought it was going to be a mild taste because everyone was drinking it, but I assume that it is an acquired taste. Other stalls sell typical German food such as bratwurst and currywurst. There are also stands that sell sweets such as candy, caramelized nuts, and crepes. Apart from the food and drinks there are stalls that sell christmas decorations. Other than that all the other stalls seem to sell mostly knick-knacks. You’ll also see nativity scenes at some christmas markets and usually there is entertainment like music during the weekends.

I think overall the markets add a nice holiday spirit to the cities of Germany. It’s a great way to meet and talk to friends over a drink. Also it adds charm to the town because of all the decorations and lights. Now if only the gluhwein tasted better…