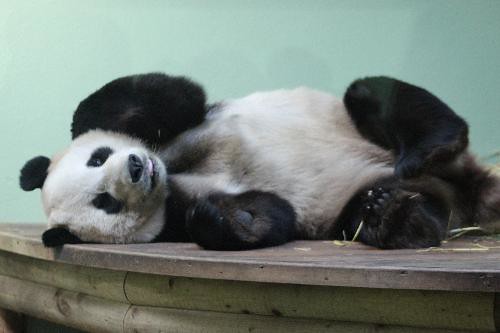 The Edinburgh zoo is nothing like the Philadelphia zoo. Edinburgh’s zoo is more interactive than the one from my home city simply because some of the exhibits allow you to walk through along with the animals. The monkey trail was the best part of the half-day trip my friends and I took. Little monkeys were literally swinging on a rope directly above my head. One guy could have propped right down on my shoulder if he wanted to. It was a bit overwhelming, but at the same time was the coolest thing I ever experienced in a zoo since I was in grade school. The thing about the Edinburgh Zoo is not once did I feel childish. I enjoyed my entire time there. The exhibits were not only child friendly, but adult approved as well. The bird exhibition was probably my favorite. A room that felt like a sauna was open for birds and humans to walk around freely together. The most exotic and beautiful rare birds were in that room. Inside one of the monkey cages, a rope was connecting an ant farm with a tunnel that led upstairs. The rope dangled right over my head as millions of ants marched it upstairs.
Educationally, the zoo is designed towards both children and adults. Conservation efforts are talked about at every exhibit and they go much more in depth than our zoos usually do. Scottish people are not ashamed when explaining why some animals are extinct. It was surprising that they write “we” when describing why some animal populations are endangered. They admit their faults more personally than we might. They also are not shy to show the link between chimps and humans. Some people in America do not care to hear about evolution and some public institutions need to be cautious about the matter. Not the Edinburgh Zoo. I thought it was compelling that those kinds of differences exist.
Another thing I was surprised to see was the kind of animals Edinburgh have. They have two pandas, which is incredible to me. I have never been so close to such an endangered or precious animal. I waited all day long to wait for the two of them to finally wake up. When my friends and I saw the two pandas, we all were in awe. The kinds of penguins they have are interesting to see too. Some of the penguins are from warm beaches and others are from Antarctica. They’re all kept together and apparently in the summer are led on a march through the entire zoo. I wish I could have seen that. That is the only thing that could have made the day better.