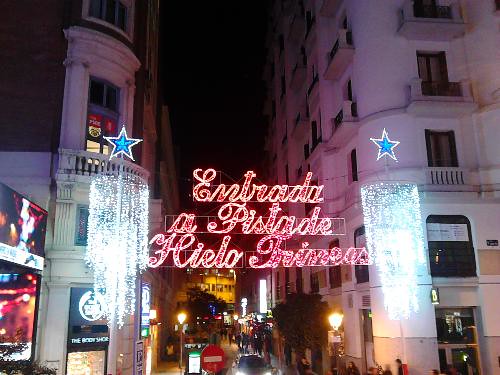 I decided to take another mini break from studying this week to take a tour of the Christmas lights in the city. I was thrilled to find out that such a thing exists, after doing a simple Google search. Surprisingly, the tour was inexpensive, only two Euros (approximately $2.50). For that low price, two roommates and I rode the commonly seen red double-decker tour bus.

Though skeptical about the low price, I really enjoyed the ride! The tour was about only fifteen minutes. I was expecting a tour of also neighborhoods and not just the inner city; however, that is not very common here from what I’ve seen. There are only apartments in my neighborhood and the surrounding neighborhoods; thus, putting up Christmas lights would be a bit of challenge. Although there are no lights even in the suburbs.

I’m often in the inner city or “El Centro (The Center)” to shop, dine, explore, or meet with friends and the Christmas lights are visible; however, on the tour bus, I was able to view large areas of the city all at once. It was then that I realized not only how big the tourist area actually is but also how old fashion it looks. Compared to other well-known cities in the world, Madrid looks pretty traditional. When I went to Barcelona, the first thing I noticed was the buildings. Barcelona also has old-fashioned buildings but with a modern touch. Overall, it has a more modern-looking city because of the mix of the modern buildings, which are made of glass.

It has adopted common traits of a city, such as, sky scrapers and many activities to do given the many shops but its infrastructure did not modernize. There are no tall glass buildings in Madrid for example. The picture for this blog post shows a sign hanging between two buildings. The buildings shown are how all building in Madrid look like, regardless of its purpose. Banks, restaurants, clothes shops, apartment buildings, hotels, book shops, internet cafes, movie theaters, hospitals, and cell phone shops all share this same outer appearance. However, I did notice that the non-Spanish stores do not all share the same building structure consistency. For example, Burger Kings, KFCs and McDonalds have big glass windows, which boldly stand out.

The contrast between the buildings and the Christmas lights, I thought, was interesting. Brightly lit lights on top of an old building are nice to look at but still odd. Because Madrid had a classical look, one would think a banner would suffice.