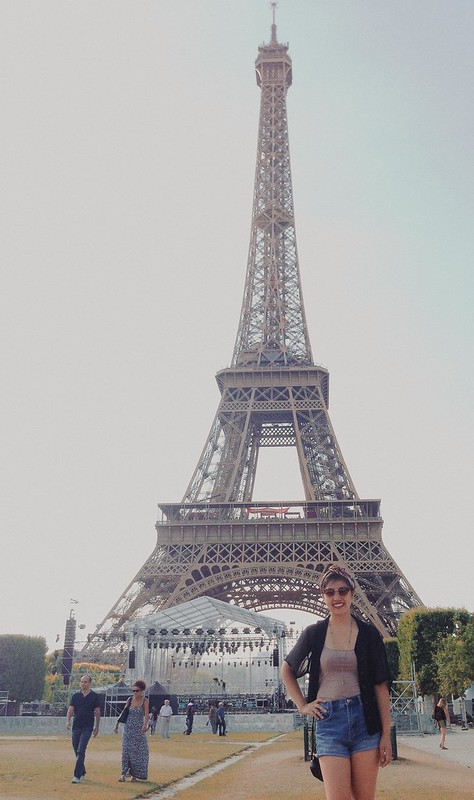 In front of the Eiffel Tower

Yesterday morning I woke up at 4:30am to go to Paris for the very first time. I couldn’t sleep the night before and kept stirring and twisting in my bed, so I was extremely exhausted. The train ride from London to Paris was only two hours and it was the smoothest train ride I’ve ever had in my life. The seats were cushiony and super comfortable, so I had no problem passing out. Not to mention, the train station and the train itself was so clean and spotless.

The first day in Paris was just a quick introduction. I checked into my hotel at the Citadines and got to take a boat tour of the city. Today was the real start of the excitement, however. Our very first stop this morning was to a local farmer’s market, which was filled with the freshest meats, fruits and vegetables. For breakfast I had a sweet chocolate almond croissant and I also purchased some dried mangoes. To my surprise, my professors were so gracious and treated us to a gigantic taste tasting feast afterwards. We got to try so many French delicacies, including ten different types of cheese. From typical cheese, like goat cheese and Brie, to the most obscure ones, like 150-day-old cheddar and coal-rolled cheese, there wasn’t one that I disliked. A few other delicious things we tried were mini salami slices, dried tomatoes, pickles, golden raisins, lychee, and Lindt chocolate (lemon and caramel flavors to be exact). As for dips, we were lucky enough to try salted cheese dip, onion and cheese dip, olive and fig dip and fig jam. My ultimate favorites were definitely the onion and cheese dip and fig jam.

Afterwards we visited the Jewish quarter, which had a lot of interesting food and clothing stores. We had the opportunity to meet the manager of Adidas, who was extremely kind and generous. He gave us a little talk about his role within the company and how he got into the fashion industry, which was really cool. In that exact same area, we visited both a tea and jam store, which had so many unique samples. I ended up buying a mango, coconut and coco jam as a gift for my boyfriend.

The very last part of the itinerary was to visit the Gaite Lyrique museum, which had a lot of modern furniture and décor designs. I was so surprised and ecstatic that I got to see my dream lamp in person. The exhibition had a gun-shaped lamp that was designed by Philippe Starck. The base of the lamp was gold and the lampshade was black. Overall, it had a very sleek and sexy look, and it’s actually a piece that I want to someday own in my house.

After all of the touring was done, I had one last adventure with a group of new friends I’ve made. We decided to go to a popular restaurant called, Le Refuge des Fondus. This was a fondue place that served cheese and meat, as well as wine served in a baby bottle. The appetizer was my absolute favorite part, since it included a small platter of cheese, pickles, potatoes and sausages.

Overall, my first two days in Paris have consisted of a lot of walking, but I’m not complaining. I’ve had such a jam-packed and fulfilling day, and I can’t wait for the many more adventures to come!