What an exciting first week we have had! This weekend we had the opportunity to go on a special trip just for study abroad students to experience more of Australia. We left early Saturday morning with about 50 other international students from all over the world. Our first stop was the Australia Reptile Park. First we ran down to pet the koalas and got many pictures with them! We saw dingos, wallabies, Tasmanian devils, echidnas, and a platypus! Then we got to go to the kangaroo area where you can walk around and feed kangaroos! We took lots of pictures feeding and petting all these kangaroos; one even had a little joey! They seemed very used to it and were grabbing the food bags from people if you didn’t feed them enough fast enough. We then drove up the central coast to our accommodation where we could choose to stay in tents or cabins. We chose a tent outside where there was a kangaroo that hung out named Josie. 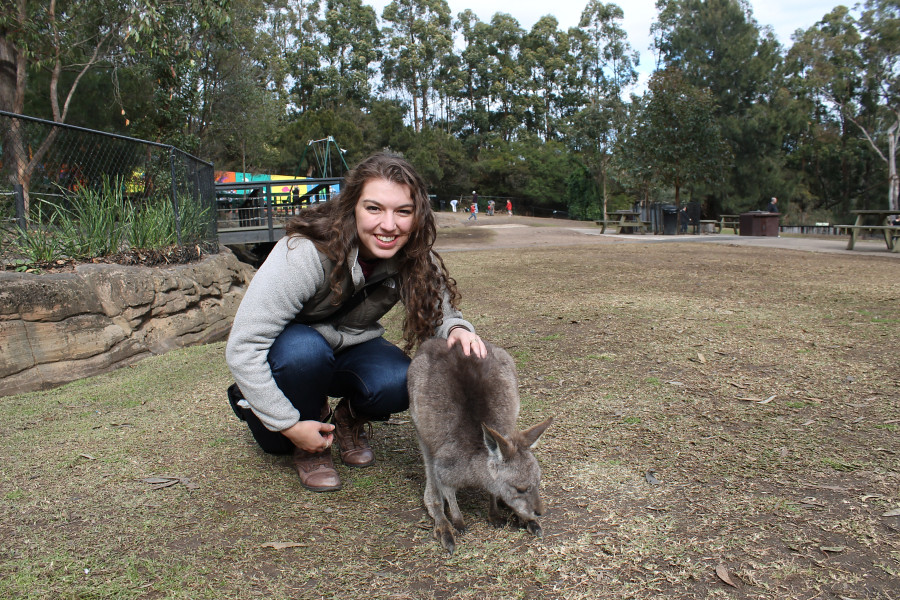 At sunrise we walked about five minutes to the beach. It was the first time I had seen the beach in Australia or even the Pacific Ocean in general. Then we departed for a whale watching tour. The first hour was terrible. There were three meter swells and half the boat was very, very, very sick. After that the weather cleared up and we even saw a juvenile humpback whale! After that we drove to the sand dunes and learned how to sandboard. It was so much fun to race down the hill on this little board. After that we headed back to USydney and we walked back for our last night in the hostel. I have to say, throughout the whole trip I felt the most disconnect with the American students. They all acted as if they had never been outside their home before. At first it was fun because everyone was so excited, but after a while it became somewhat embarrassing to be surround by people who were acting so immaturely. I made a lot of European friends though! We met people from Germany, Denmark, Sweden and Norway and they were all very nice and we had a great time!
Monday morning we moved into our permanent residence here in Sydney in the Queen Mary Building. The lower ground floor has a huge study room, movie theater, gym, laundry, and entertainment area. The ground floor has endless kitchens, and then on the 11th floor is a sky lounge and outdoor BBQ area and the 12th floor has an open area rooftop garden with benches and more BBQ’s and on one side a very fancy kitchen and on the other some more laundry. We all have single rooms with even a TV included. The only draw back is limited internet. We each get 10GBs a month and anything after that we have to pay extra for.
After a morning in, we went to our official orientation! It was in the Great Hall and we heard from all the important people of USydney! Then we went to orientation with our advisors and learned about how to change courses that we are in and how to read our timetables. This was very important for me because I had so many conflicts in my schedule.
Tuesday was great because they arranged for students to go on day trips all over Sydney. I chose to go Manly beach, which was a ferry ride away! It’s a lovely ferry ride and the beach was beautiful. It’s still a bit too cold for swimming here, but soon enough! Today was exploring the Rocks which is a beautiful district by the harbor that has a ton of great shops to explore. Can’t wait to see what the rest of orientation week has to offer!