One of my sorority sisters also happens to be in London, and she’s actually living in the same exact building just one floor above my flat. She is doing the London and Berlin study abroad program and just arrived in London a few weeks ago. Today we decided to go to Camden Market, since neither of us have been there yet.

When we first got out of the tube station we weren’t really impressed by the market and thought that it seemed a lot smaller than everyone said it was. Before coming to Camden Market we were told that it was the largest market in London, and that people tended to get lost in it. However, when we first got there all we saw were the smaller markets outside of the main one, so we were really confused.

Then we went down by the river where we saw more tents, this time with more unique and fine jewelry. That was when we ran into my flat mates who told us that there was a bunch of delicious food downstairs near the river. We immediately went down there, and everything looked and smelled so good. The food that was sold there was equivalent to those at Borough Market, and I ended up ordering a prosciutto, tomato, arugula, mozzarella and pesto quesadilla. After that we both bought fresh peach, apple and pineapple smoothies, since it was such a hot day.

We thought that this was all there was to the market, so we still figured that it was really small, but right after we bought our smoothies we discovered another section selling clothes and accessories. There, I actually bought a mini dream catcher that I’ve been looking for for years to put on my car mirror. Tanvi and I also bought matching maroon, elephant printed tapestries, since they were two for seventeen pounds. This was another item that has been on my wish list for years, so I’m really glad that I got to cross it off. 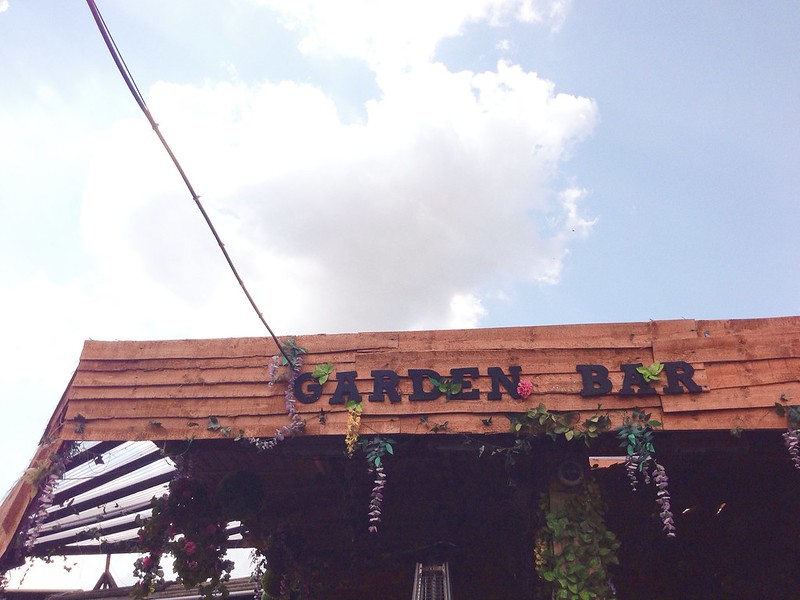 The Garden Bar at Camden Market

It was in here that we saw another indoor section filled with more clothes and accessories, so we decided to check it out. Right when we walked in we were so surprised by how large the market was. This was exactly what we’ve been searching for, and if we hadn’t decided to explore the previous mini section, then we would have left, not knowing that we’ve missed the heart of the market. The indoor market had so many good merchandise including art and vintage clothing. I passed by an adorable stuffed animal stand that sold nothing but stuffed alpacas in cute girly pastel colors. I decided to buy a mini cyan-colored one that had a gold glittery crown for one of my best friends. Outside of this indoor market there was another outdoor section with food and merchandise. It was here that we walked up an alleyway and saw the cutest outdoor bar called Garden Bar. It was decorated with a brick wall filled with fake green vines and flowers and floral printed letters spelling “Garden Bar.”

Camden Market was such a fun and interesting place to explore, and it’s another one of those places that you can’t cover in just one day. My plans are to come back in the near future for some more good finds and delicious food!