It’s the beginning of the third week of classes and I’m starting to feel really settled in here. I can find all my classes no problem now and even direct some lost students to buildings all over campus. I try to walk different ways to class just to get to know the area better. Having hospital buildings all around between where I live and campus at least lets me know that I’m still in the right area! I’m also becoming very comfortable with life in Sydney. I have my favorite café that I love to hit in the mornings if I don’t have time to make breakfast. The two sweetest guys work the café and are always so welcoming and funny. It’s right down the road from my building so it’s great to get a fruit salad or croissant first thing in the morning on my way to class.
This week on campus is the International Festival and it has been so much fun! The first day, the Featherdale Wildlife Park came and brought a koala, a quokka, and a orphan Joey that was so young, it barely had fur! I also got to hold a blue tongue skink and a baby crocodile. They have also had a lot of great food and fun little games to play run by the student union. Today was Asian food at the international festival and they had tents representing Thai, Malaysian, Indonesian, Chinese, Korean, Japanese and other ethnicities all there and everything was good! Tomorrow is a lot of European food from Polish to Italian to Spanish, so I’m saving room for lunch tomorrow. All of this has been set up on Eastern Ave., which is the main stretch from the Quad to the Wentworth Building. 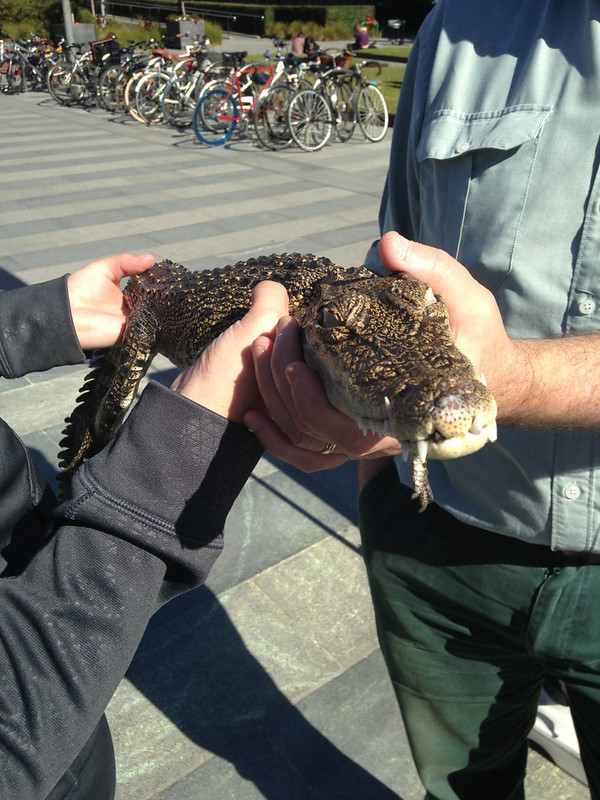 As far as academic go, I’ve done my first presentation here already! I decided to go the first week possible because I hate drawing it out and being nervous the whole time! I was talking to some of the students here about how by week 3 at Drexel, I would have had an exam by now and they were all just stunned that we have more than one exam during a term. I am very grateful for the break! It’s hard to believe that we have been here for a month now! It feels like I’ve been calling Sydney home for much longer than that! My class tomorrow has been cancelled because my professor is sick and Friday’s I don’t have classes, which is great because I have a ton of studying I want to do. While I don’t have much due over the next few weeks, I’d like to stay ahead of the game while I can.