This week has mostly been work considering I will be gone all weekend on my Forest Ecosystem for fieldwork starting Friday. To make things even more stressful I have a midterm for Astronomy on Monday and Monday is the day Nick’s parents arrive here in Sydney for their vacation. AHH! I shouldn’t stress too much because I’ve been really good about staying on top of my work the past few weeks. In more exciting news, you have probably heard that Tony Abbott is no longer the Prime Minister of Australia. There was a challenge a few days ago by Malcolm Turnbull and they voted, oddly at like 10:00pm and Turnbull surpasses Abbott by more than 10 votes. I did not agree at all with Abbott on a lot of his ideas and policies, and while Turnbull is still part of the liberal party, I have heard that he is less extreme than Abbott. Many people expect that there will finally be a voting on legalizing gay marriage in the coming weeks and other foreign policies will change.

A lot of my Australian friends are very happy about this change in PM and have spent a good part of the week making sure I understand, not only how bad Abbott’s policies were but also what kind of person he was himself. They showed me the video of him going to an onion field, being handed an onion, not peeling the onion, and taking a bite out of it. Or the multiple interviews where he didn’t know what to say and just nodded during an uncomfortable silence until he either left or said he wasn’t going to answer. Some of them are pretty funny. Also, this is Australia’s fifth PM in five years! 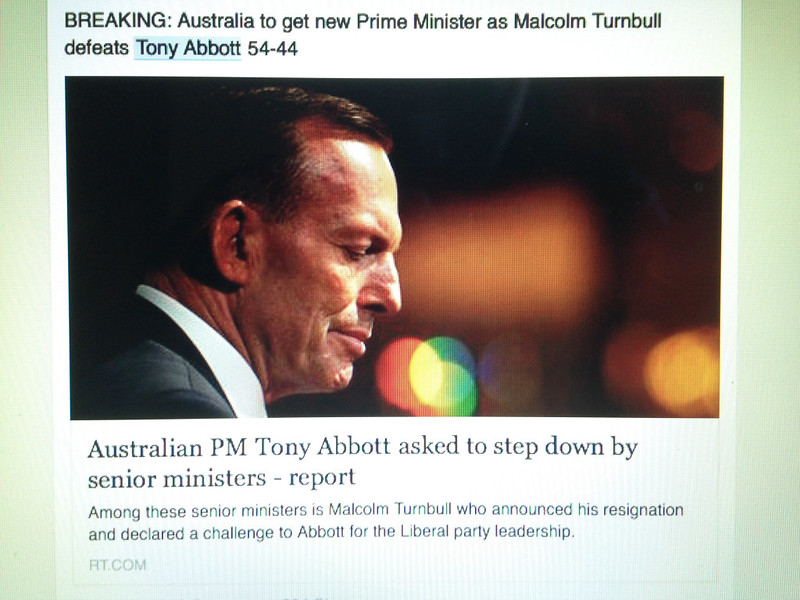 It’s finally starting to get warmer here! I say that now and it will drop back into the 60’s next week… This weekend it got into the 80’s and so far this week it has been in the 70’s and been sunny and beautiful. I am very excited for spring and the beginning of summer here in Australia, but somewhat thankful that I miss the worst of the heat here. While I will not be looking forward to coming home to winter and snow, it will be somewhat better than 100+ here. We’re suppose to have pretty good weather this weekend for our field trip, however it’s been going back and forth between rain and no rain almost everyday. Hopefully it holds off so we can go find all the different species of Eucalyptus!