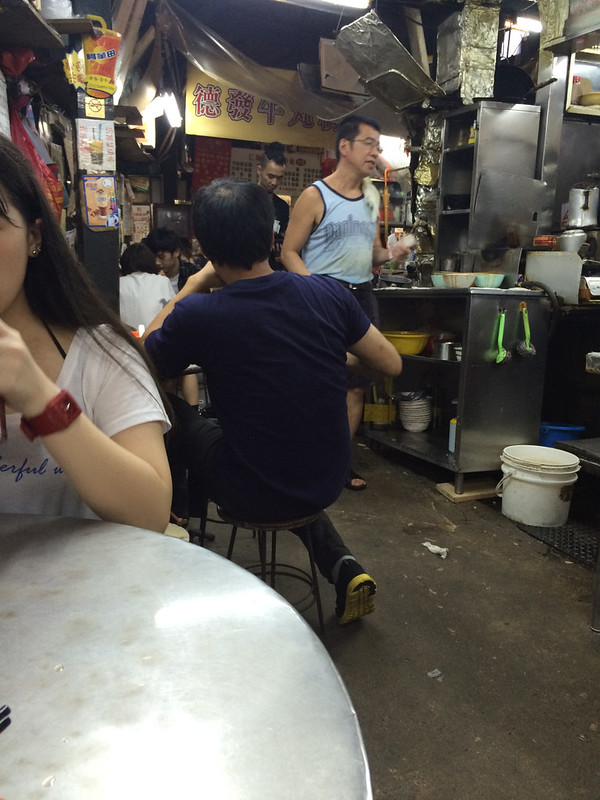 In addition to the Wong Tai Sin Temple, we also went to two other places that day: Victoria Peak and Sky 100. Victoria Peak is a mountain on Hong Kong Island (the tallest, actually). There is actually no fee to get onto the viewing platform, but it costs money to get there, of course. There wasn’t too too much time to spend there; people just go, take some photos, and leave.

The drive up the mountain was very fun. In addition to the narrow, winding roads, we had to deal with the fog that was heavier and heavier as we gained altitude. The roads were still two-way streets, and at one point, we were right next to another bus that was heading down the mountain. It was kind of scary because we were right up to the edge of the ledge, and there wasn’t an additional ledge that jutted out to help break our fall. That is, if we accidentally drove off the ledge, then we’d fall for a really long time. Luckily, though, our driver was competent enough to get past the other bus safely. Because it was foggy, too, we would sometimes have trouble seeing out the window. At one point, we could only see maybe 8 feet outside — any farther and all we saw was fog.

On our way up, too, we would see people on the side of the road taking photos of the view. Our tour guide, May, said that these people were Chinese tourists — the bus would drive them only halfway up the mountain, have people take photos, then head back down and go to the next location, not really letting people take the time to appreciate the view.

Afterward, we headed to Sky100, which is kind of like New York’s Empire State Building, or Chicago’s Sears Tower (now named Willis Tower), or Taipei’s Taipei 101 — a very tall building in which we can look at Hong Kong from very, very high up. Two differences I can think of between this and Victoria Peak is that the two sights are in different parts of Hong Kong and that one is indoors and the other is outdoors. Additionally, Sky100 allowed us to have a 360-degree view of the area, not just a 180-degree view.

We left the group tour soon after that in search of food. One of my friends at home had strongly recommended a restaurant called Tak Fat Beef Ball, located in the Haiphong Road Temporary Market in Tsim Sha Tsui. Jacky, my friend, said that the restaurant was located under a “shady bridge,” and he was right — there was a large market located under the underpass of a highway. My friends and I actually couldn’t find the restaurant at first because it was so hidden, but we ended up following some people, who also happened to be going to the restaurant, as we found out. The noodles were really good — approved by my Taiwanese friends, who are critical of Hong Kong food.

“Places like this oftentimes have the best food,” they said. When they say “places like this,” they mean really hidden, shady places that are mostly only known to locals. Hole-in-the-wall places.