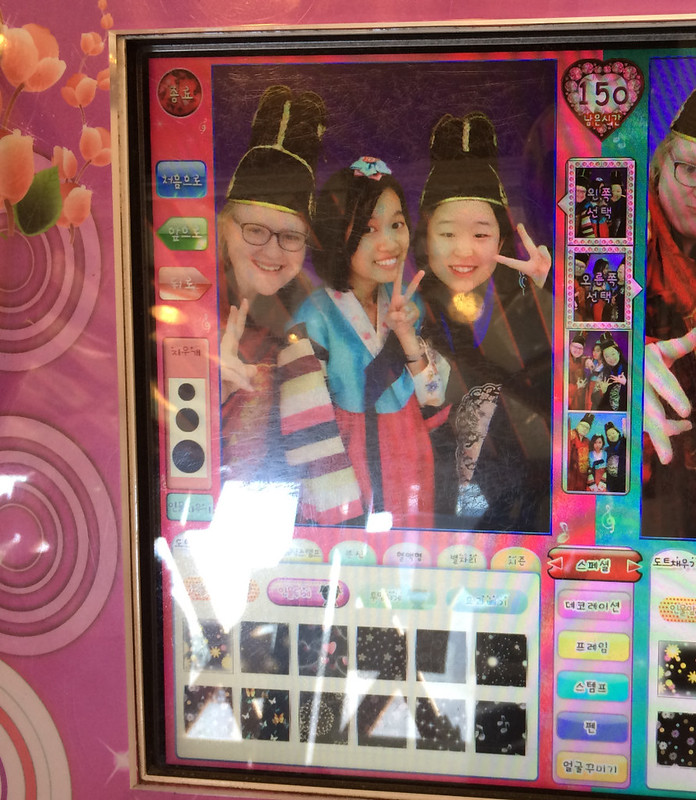 In the early morning on October 30th, my friend Alix and I hopped on the plane to South Korea! We arrived at around 4:30 AM, got on a limousine bus into the city, and met her friend Winnie at the Lotte Hotel near Lotte World. The limousine bus was very convenient and really nice to take; there were many stations just right outside the exit of the airport, and the bus (which was actually just a coach bus) was clean and comfortable.

Winnie brought us to Insadong first, a neighborhood with lots of crafty stores and cute tea shops. To get there, we took the subway, which was on par with Shanghai’s, Hong Kong’s, and Tokyo’s subways… Do you see a pattern here? After going to so many different countries, I started to think that maybe other public transportation systems weren’t especially clean, it’s just that Septa is dirty… I was sad when I realized this fact.

Anyway, Insadong was a really cute small place to shop around. The first thing that Alix and I noticed was that Korea was so COLD. It was way farther from the equator than Hong Kong is, plus it was the end of October. We kept ourselves warm by shuffling from store to store, though, and eating warm street food (which I will discuss in detail later). Insadong is a place you definitely should go if you want to try on a simplified hanbok, traditional Korean clothes. The Chinese have qipao, the Japanese have kimono, and the Korean have hanbok. The clothes “rental” was free of charge to put on when we went to take photos in the photo booth.

Afterward, we went to Gyeongbok Palace, the main royal palace back in the day. What I find so fascinating about places like Tokyo and Seoul is that there are historical palaces right in the city, plopped right in the middle of the busy streets and high rises. It’s juxtaposition right before your eyes, and it’s wonderful because it shows just how much history is respected in these cities. We managed to catch the changing of the guards — and yes, they still have guards outside the palace. What I noted about Korean traditional clothing is that it has a lot of bright colors. You can see in the photo above that the hanbok was bright blue, pink, yellow, and white — just to name a few colors. The guard’s uniforms varied in color; some wore red and yellow clothing while others wore all-blue clothing.

Alix, Winnie, and I went to visit Ewha Womans University (and no, that is not a typo), one of the most prestigious universities in South Korea. Winnie actually is studying there, which is really impressive! Around the university were a lot of makeup stores (Asian beauty products are really nice yet reasonably priced) and (most importantly) food stalls. The food stalls. Were. Amazing. I cannot emphasize how wonderful it was to pay about $1 USD to get the most delicious food that was warm and walk around in the near-freezing weather with it. I tried hotteok, a kind of pancake with a filling of brown sugar, honey, and cinnamon. I was almost ready to cry when I ate it for the first time. The dough part was slightly crispy and soft and the inside was melty and warm.

I also tried gaeran bbang, which is egg on bread, which sounds kind of lame, but trust me — it was amazing too. There is an egg on top of the bread (which was just was warm and moist and perfect as the hotteok bread) as well as an egg filling in inside the bread! It is really more like if an egg and a dinner roll had a child, but tasted 10x better. Dinner that night (yes, we still had room in our stomachs) was samgyeopsal in a restaurant with a wonderful atmosphere. It was exactly right out of Korean dramas — ceilings low, lights dim, very crowded. The food tasted as good as it looked in dramas, though. One thing I love about Korean cuisine is that there are so many side dishes to eat the main course with. Endless possibilities with just one meal.