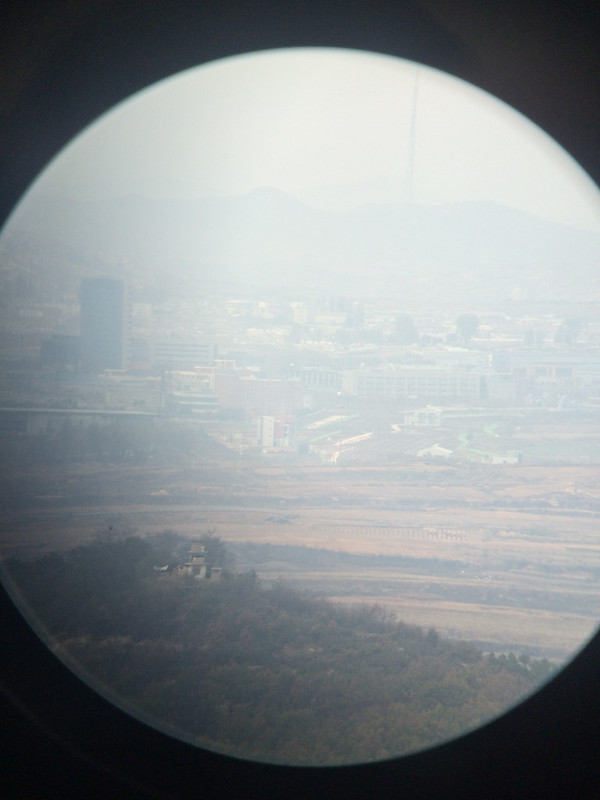 Last part of my Korea adventure.

We woke up really early on November 1st and were on the subway by 7:15. We were up so early because we had signed up to go on a tour of the DMZ, or Demilitarized Zone. The DMZ is a strip of land that runs between North Korea (hereby NK) and South Korea (SK), splitting the Korean Peninsula into two. The actual line is the MDL, or Military Demarcation Line, and on both sides of the line is a buffer zone. Troops from both sides are stationed 2 kilometers away from the MDL, making the whole buffer zone, or DMZ, about 4 kilometers wide.

We were taken to several places near the DMZ that day, but the most notable to me was the Third Tunnel of Aggression. To this point, there have been four tunnels discovered leading from NK to SK, dug (presumably) by NK. The third tunnel was discovered in 1978, not so long ago. What was very chilling is the fact that this tunnel was frighteningly close to Seoul, SK’s capital; it took about an hour to get there by bus from Seoul. The tunnel was about 2 meters wide and 2 meters tall and was designed for a supposed infiltration of SK.

Short history lesson! History is not my best subject, but I found this to be very interesting. There were three pieces of evidence that pointed to NK being the digger of the tunnel (of course, NK initially denied building the tunnel). First, the tunnel is slightly sloped, with the lower point at the NK side (that is, the closer you were to SK, the closer you were to the surface). This, according to our tour guide, was to prevent water from pooling where they had to dig. There was natural water dripping into the tunnel when we were there, making the mat thing they laid on the ground to be very spongy and wet. Secondly, there were places where dynamite were seen to have been placed (either that, or the dynamite exploded in a certain direction, I can’t remember clearly) that indicated that the tunnel was being built toward SK. Those places were then splattered with yellow paint, making them very clear to tourists.

The last piece of evidence (if this can be considered to be evidence) is my favorite: after NK’s initial denial of any knowledge of the tunnel, they said that that yeah, okay, they did build the tunnel, but it was only because they were digging for coal. Then they painted the walls black. We actually did see some remainders of the black paint on our tour, and the walls didn’t really look like coal to me, but then again, it’s been a while since they discovered the tunnel. (Actually though, there were geological signs that coal was not possible to be in the area in the first place.)

We were given helmets for safety and took a monorail down to the tunnel. It was not very dim (there were lights on the walls), but natural water dripped from the walls, making the tunnel slightly moist (for a lack of a better word). However, there was ventilation provided, so the air was not disgusting to breathe; it just smelled like underground air. The ventilation pipes, though, ran through the tunnel, making the area available to stand even more limited. As short as I was, I bumped into the pipes a couple of times. Thank goodness for the helmets.

There is an end of the tunnel that we traveled to, and (fortunately) it does not end in NK. Upon discovery of the tunnel, three concrete barricades were put up. We were only able to walk to the third barricade and look through a small window to see the second barricade.

We were not allowed to take photos in the tunnel, of course, because of the possibility that a tourist visiting the DMZ may be a NK spy trying to figure out how to reopen the tunnel and such. However, later in the tour, we were taken to the Dora Observatory, where we were able to catch a glimpse of the NK through binoculars. Using my biology laboratory skills, I was able to take a close-up photo of NK — well, not extremely close-up, but way closer (and clearer) than your iPhone 5 camera if it was zoomed in.