A big thing that I’ve heard that I HAD to experience in Hong Kong was the cha chaan teng. Cha chaan teng literally translates to “tea restaurant,” and it usually serves your regular Hong Kong food for a moderate price. People are not expected to receive 5-star service in 5-star restaurant surroundings.

I had initially been under the impression that the cha chaan tengs only served breakfast-type foods, but after some research it turned out that they serve lunch-type and dinner-type food, too. I’ve been to two separate cha chaan tengs, the first being Australian Dairy Company, and the second being Kam Wah Cafe. I will focus on the former.

The Australian Dairy Company is famous for its breakfast set (in particular its scrambled eggs) and its milk pudding. It’s also famous for having speedy service and rude servers. My friend Maisy and I went there for a Sunday brunch a few weeks ago and the line for the restaurant was literally out the door. Even though there were more than 10 people in front of us in line, we only waited for about 10 minutes before we were ushered in. The restaurant was extremely crowded with other people wanting to try the famous restaurant as well. Booths lined the sides and the middle of the floor was crowded with tables with about four chairs for each table. Maisy and I joined a table that already had two guys. We did not know the two guys there, but it is common in Hong Kong for strangers to share tables at restaurants; this is due to the huge population with limited space. We did not talk to the guys, however. 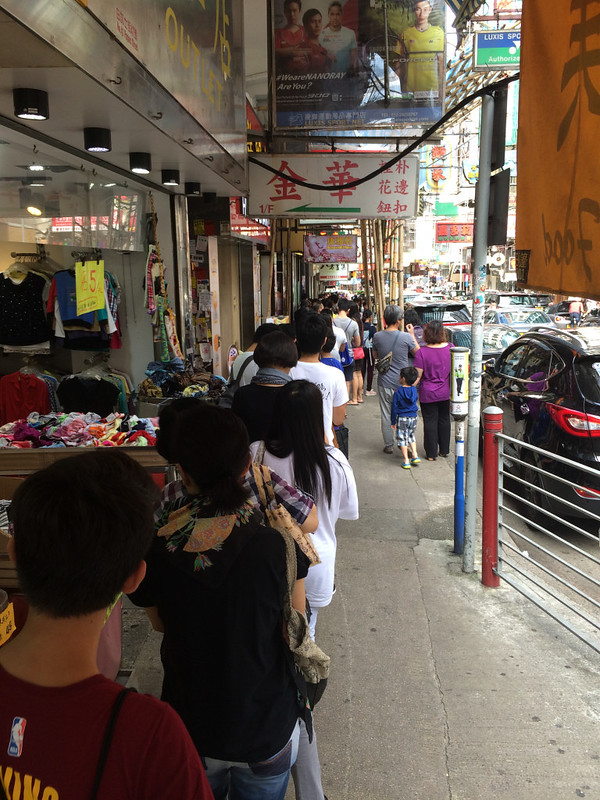 Maisy and I both knew what we wanted; she is a local Hong Kong citizen and I had done my research on OpenRice (kind of like Yelp) before coming. I ordered the breakfast set, which included macaroni soup with char siu (BBQ pork), toast, ham, and scrambled eggs. It came with a hot coffee or milk tea (I chose milk tea, in case ya’ll were curious). I was really thankful that I was with a person who was fluent in Cantonese, because the servers were really intimidating! They came up to us with a white pad and pen and asked what we wanted — no frills or small talk like “how are you all today,” just “what do you want.” One of the only upsides to this is that the restaurant functions extremely efficiently. 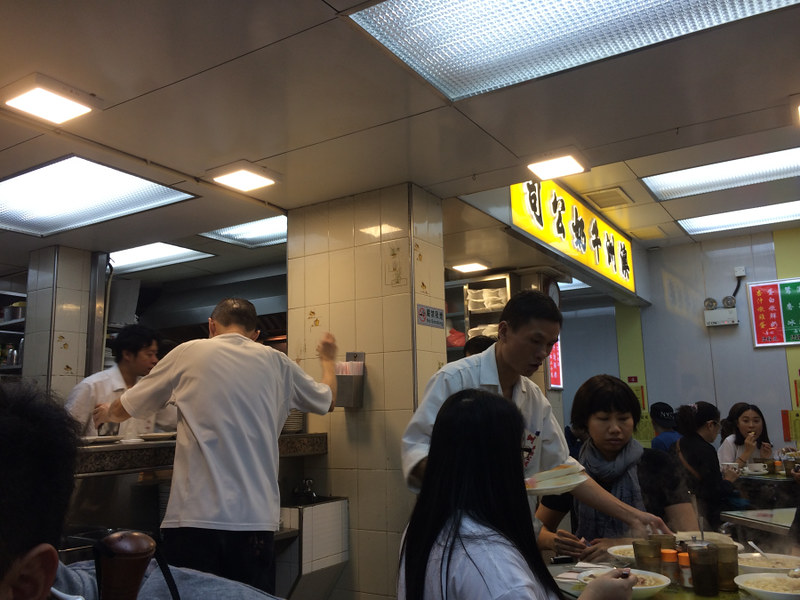 Maybe a minute after placing my order, my hot milk tea was placed hastily on my table. I turned to Maisy and said, “I heard about the fast service here and that they would serve the food really fast. I can’t believe people weren’t exaggerating,” and right after I said that, the waiters brought all my food to the table. It literally hadn’t even been 5 minutes since I ordered. (Move aside, McDonald’s and Burger King. Cha chaan tengs are the true fast food restaurants.) 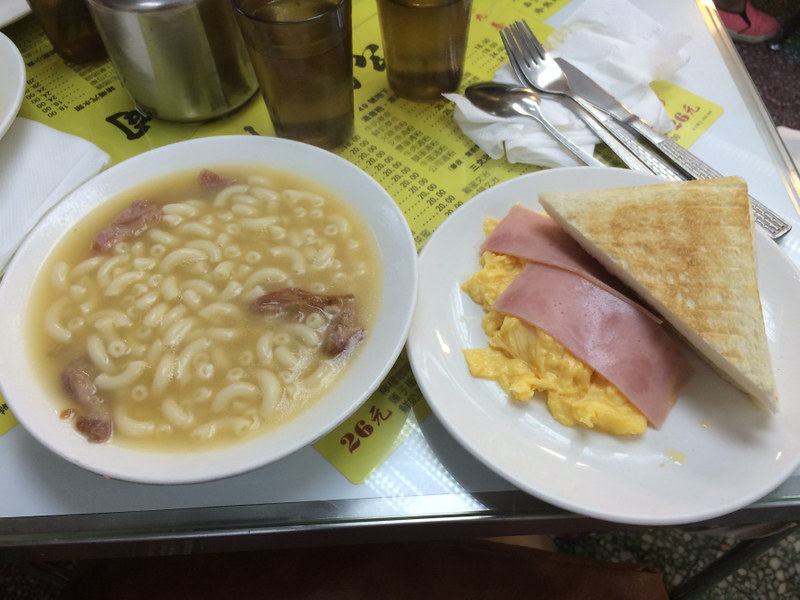 The macaroni soup and ham were nothing special, but what the Australian Dairy Company was known for really had their merits. The scrambled eggs were so smooth, moist, light, and rich in flavor, and the toast was lightly toasted on the outside and buttered just perfectly, still warm inside. The toast here in Hong Kong is really thick — maybe about an inch thick instead of one centimeter, like in the US — which, by itself, makes the toast taste better. I’m not sure what kind of bread the Australian Dairy Company uses, but it was so fluffy, like a cloud. I was really impressed by toast, and that doesn’t happen every day.

The whole meal was so filling, but in the end, we still ordered one more thing: the milk pudding, hot. We only ordered the pudding once we were done with our entrees. Why? I don’t know. Maisy told me that it was a custom to order things that weren’t the main meal (in this case, the milk pudding AKA steamed milk or custard) near the end, and did not have a better explanation. One waiter took away our empty dishes and another came and asked us if we wanted something else. Initially, I wanted the cold milk pudding, but I changed my mind at the last moment (because I felt that hot milk pudding was more traditional). Unfortunately, Maisy was in the middle of ordering and talking to the waiter while I changed my mind. I didn’t understand what Maisy and the waiter were saying, but it was very angry-sounding (on the waiter’s part), rapid-fire Cantonese.

I asked Maisy what they were talking about after the waiter left and she told me that she asked for the cold milk pudding, but after I asked Maisy to switch it to the hot pudding and she told him so, and he complained that we were really troublesome and wishy-washy. Then he walked off. At that moment, I made a silent decision to never come back without a local Hong Konger.

Soon after, the milk pudding came; it did not take long because there were tons of pre-made bowls. The milk pudding was white and had the consistency between Snack Pack pudding and Jell-O; it was solid enough to cut into with a spoon, but was still soft. The taste was very pleasant and light, tasting of fresh milk and just the slightest hint of egg. 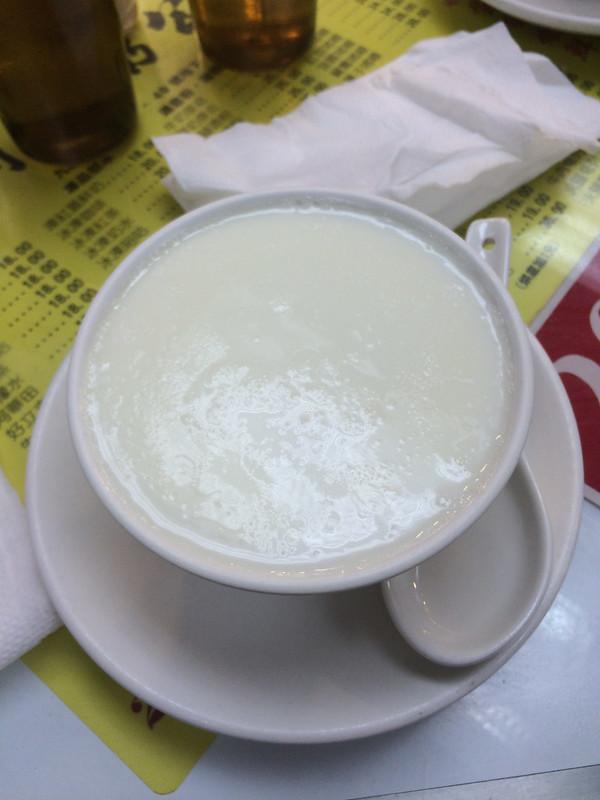 The pudding, eggs, and toast were worth coming back for, and apparently the waiters could speak Mandarin Chinese (due to the influx of Mainland Chinese tourists) and English, but I feel that my skin is not thick enough to handle a solo visit. I definitely would recommend people to pay a visit here if they want to live through the experience of a traditional cha chaan teng (sharing tables in a crowded place) and want to interact with the scary waiters. The food is good enough, but I feel will not top your “top 10 things you must eat before you die” list, so don’t despair if you try to go and find out that the restaurant is closed (on Thursdays, if you’re wondering).