One thing that I will miss so so so much at Drexel is the liveliness of the school life. When I still lived on campus, there were events every now and then, but they didn’t seem that interesting, or were the events often. Things are simply more lively here, more close-knit, and really reflective of the Eastern collectivist culture (as opposed to Western individualist culture). Events can range in size according to the floor, hall, and whole residence.

There is one RA (or here in Hong Kong, RT, for residence tutor) for two floors. Every two floors (I presume) has a WhatsApp group, which I find kind of fascinating and kind of personal? The closest thing I had to this was a Facebook group for my floor in Millennium Hall when I was a freshman, but even then, it was more impersonal than a direct group chat. We’ve also had hot pot night before here in Hong Kong with just residents from floors 9 and 10, though I didn’t join — quite a few people went to that, however. Hot pot is great because it’s extremely simple to do, and inexpensive, too, yet everyone gets a lot out of it — lots of food and food conversation. Because everyone is using the same pot, there must be conversation and sharing of food amongst fellow diners. It’s rather interpersonal. There was also a dessert night also hosted between these two floors, which I also didn’t join (hey, I’m a busy person), but it was still nice to see people excited and socially active.

There were so many activities that were for the whole hall, too. A tradition that happens once a term is “Bonny’s Kitchen.” Bonny is the residence master for Hall 5, which is the hall I’m staying in. We are invited to her apartment, which is actually on the 15th floor of the building, for dinner prepared by her, her husband, and their helper. It was shocking to hear that the residence masters lived in the same building as their residences! Anyway, the dinner was really nice (for those of you reading, I hope you get to try Bonny’s homemade chicken wings one day. They are the bomb), and it shortened the distance between the residents and our residence master (literally and figuratively). Photos were taken at the event and put in the elevator for decoration, which is cute. The most I’ve seen in Drexel elevators were ads for textbook rentals. 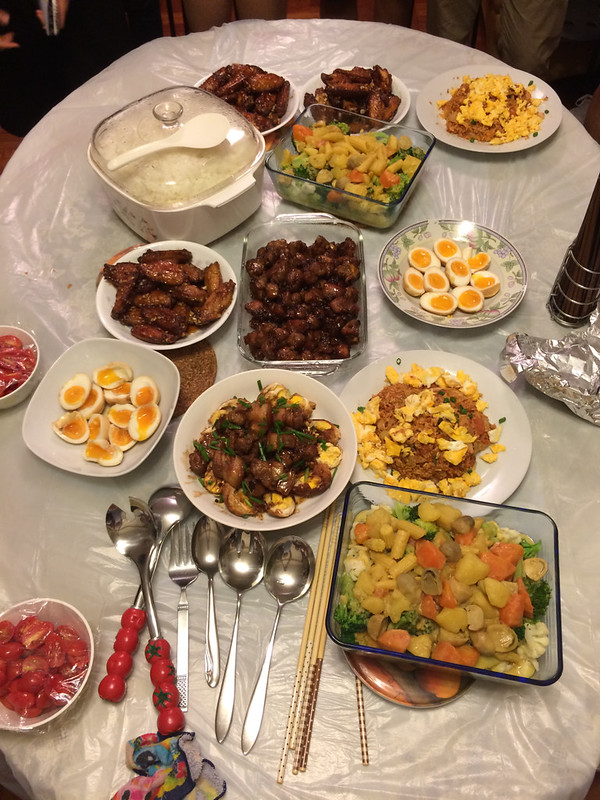 There was also an “exchange/international student orientation night,” which involved a trip to the nearby neighborhood of Sham Shui Po. The residence tutors and some student helpers taught us how to get there by bus, and all of us went out for traditional Hong Kong food and dessert. I was lucky enough to get matched to the group who went to dim sum, a traditional Chinese food which involves a lot of bite-sized food in bamboo steamer baskets. I would like to say that all of us had a great time since we left full and met a lot of new people that day. 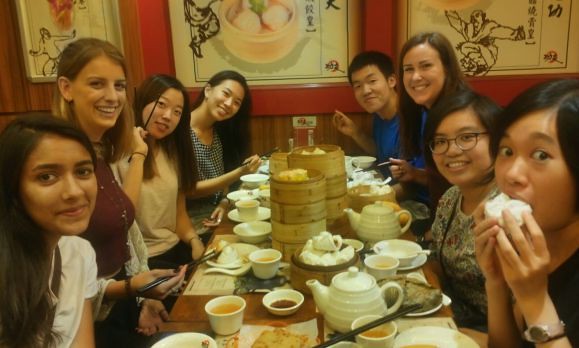 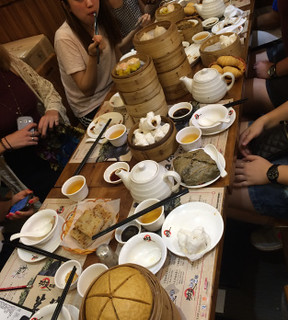 For Halloween, there was a haunted house in the hall! I really wanted to go, but couldn’t. It seemed like a lot of fun, though; there was lots of screaming heard in the lobby since the multi-purpose and common rooms were the locations of the haunted house. The promotions were pretty well-done, too. They weren’t simple flyers with clip-art but a piece of art. (I’ll attach it below) Also playing in the hall lobby was a short ad for the haunted house playing on a mini TV. The devotion toward promotion is really strong, and I have to applaud the marketing team for that. 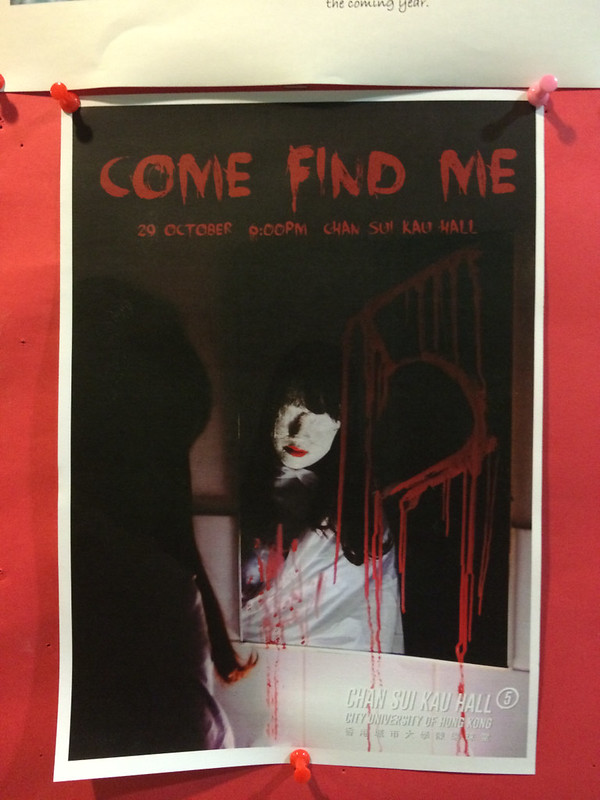 One thing that is fairly recent (going on right now, in fact), is the Add Oil Series. Add oil, or jia you, is a Chinese term that vaguely translates to “keep going” or “keep working hard” (eh, it sounds less lame in Chinese). The hall scholarship team provided a bunch of small postcards for all the residents who wished to participate in the lobby. The idea was to write an encouraging, “add oil” message for a fellow resident, and the scholarship team would deliver that card to the person you wanted to send it to! It was a really, really, sweet idea. 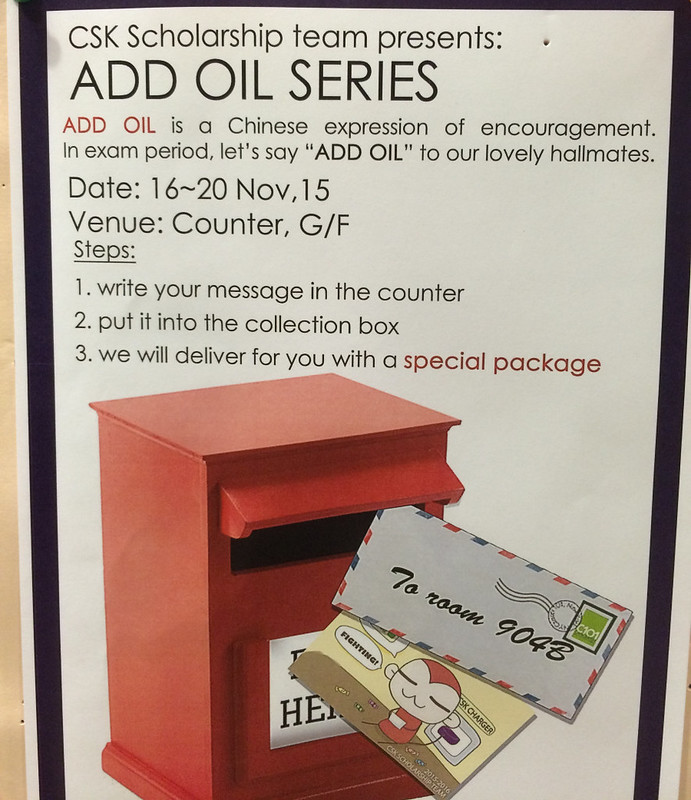 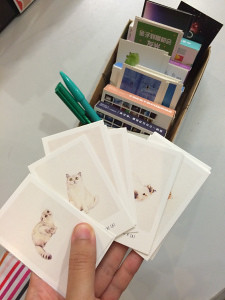 There are many things going on around campus. Back in the beginning of the term, there were tons of advertisements for “orientation camp” — sometimes for each hall, sometimes between two halls. I wanted to join in, but couldn’t because it was only limited to Cantonese speakers. I’m guessing orientation camp involved a lot of games and get-to-know-you icebreakers. They would last for maybe two or three days. My friend who participated in one said that there were people who wouldn’t sleep until the wee hours in the morning, like 5 or 6 AM, and wake up at 7 or 8 AM for the next day of orientation camp. I guess they were really excited about it? Around campus now, I see a lot of people wearing t-shirts from different colleges (“I’m Studying Business!”) or halls (I have a Hall 5 shirt in purple, which is our hall color) or camps (the Hall 10 orientation camp shirt comes in dark blue, maroon, and gray). The friend who attended an orientation camp showed me a yearbook-like booklet they gave to all of the camp participants — in COLOR. I really love the effort everyone puts into things here.

Sometimes it’s a bad thing, though. I’ve been sleeping late recently and can hear people shouting and screaming at like 2 AM in the morning. Last night, actually, I woke up around 4:40 AM because people outside the window were so loud.

I live on the 9th floor, mind you.

One thing that is more relevant to today’s issues is the wall of notes for Paris, following the terrorist attack that happened this past Friday, November 13th. I noticed a table very close to the walkway that connected the dorms and the academic buildings. When I walked closer, I noticed that there was a jar of markers with a bunch of post-its and tape on the table, and next to the table was a wall of colorful post-its and written messages on them, with many along the lines of “pray for Paris,” “love and peace,” “we stand together,” and even a “jia you.” It was really sweet and touching. The wall of notes first appeared on the 16th and there have been so many notes added I couldn’t help but take a photo. Although the events of the Paris attacks were awful, it’s times like these where we can see the beauty of humanity — from small things like these note walls to bigger things like people offering opening their homes to those in the vicinity (#porteouverte) or people lining up for hours to donate blood to the victims. 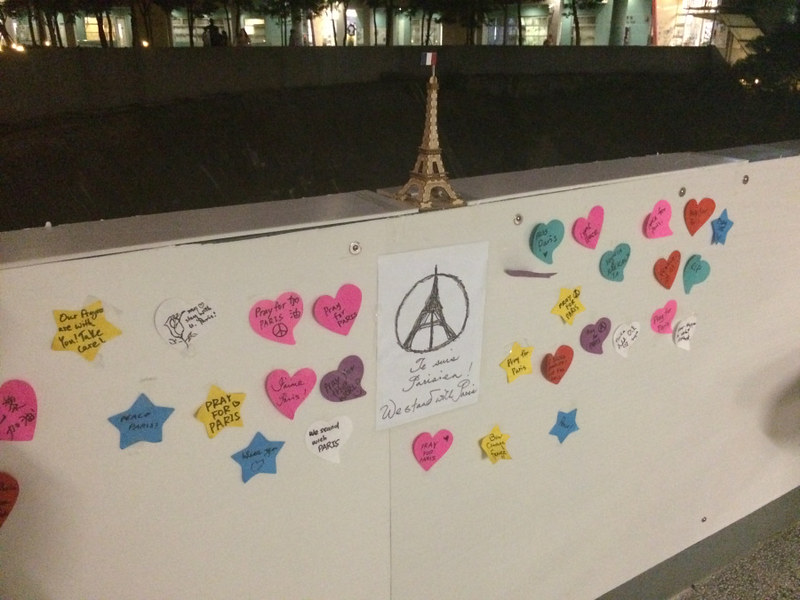 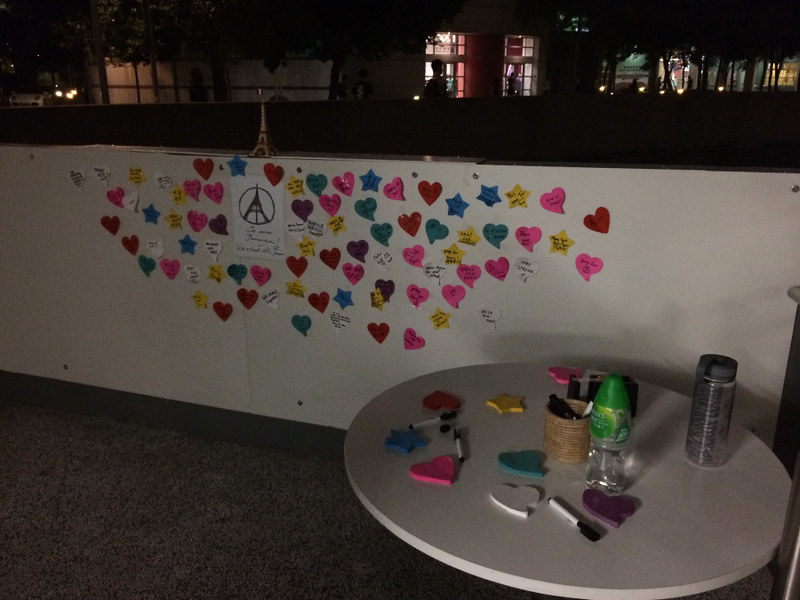 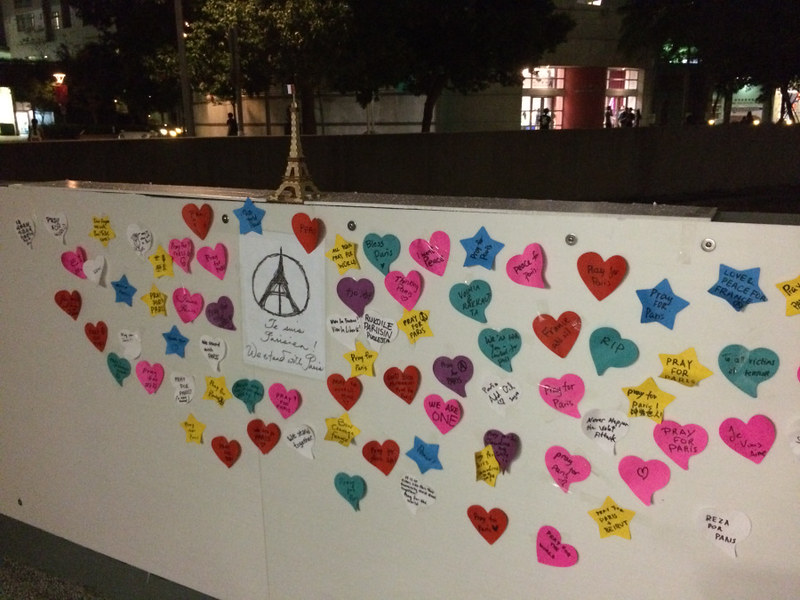 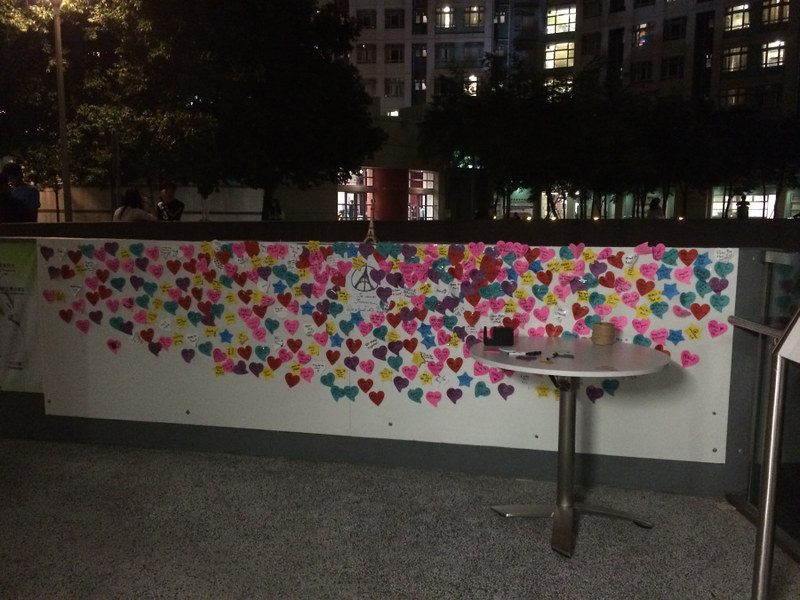