Hola amigos! So after a long stressful weekend full of two exams, I definitely needed to treat myself and what better treat then trying out different kinds of wine (vino)! Joining CAUC on another one of their events, our group met up to take a bus out of Santiago and to a place called Viña Undurraga in Talagante, Valle del Maipu. It was a pretty short bus ride lasting about 30-45 minutes, I want to say, and the seats were actually comfy. I really needed a trip like this because the day before I had just finished taking an exam for my Chilean Foreign Policy class which required us to go over about 200 pages of readings (all but one in Spanish). Even though I have another exam coming up next Friday, it feels nice to be able to take a breather and relax. 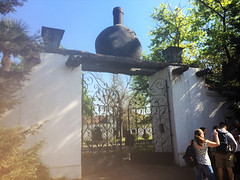 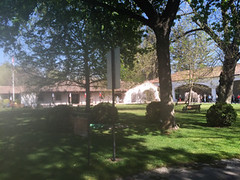 The place was absolutely beautiful and we could tell that this was legit by its resort-like presence and appearance. After staying on the front courtyard for a bit to admire the aesthetically pleasing atmosphere, we were led into the gift shop so that we could “do some shopping first while sober.” We all laughed, but then all agreed that that was a smart idea. 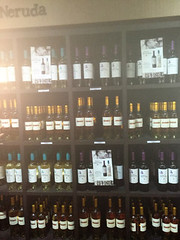 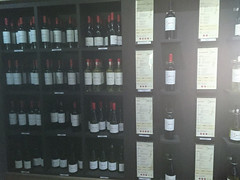 My phone’s camera was acting weird on this day so I did not shoot as much photos as I would have liked. However, the shop was pretty small. There was plenty of shelves of bottles, but surprisingly not as much as I expected. I imagined almost endless rows of wine bottles, but I think that was just my imagination running wild. Furthermore, there were also a good amount of affordable bottles of wine. I purchased a bottle of “Volcanes de Chile” for about 6,000 Chilean pesos which is little over $6 US dollars. I am in no way knowledgeable about wine bottles, but one of the chaperones on the trip had an app that would allow you to check out the ratings for wine bottles and my bottle scored 3.8 out of 5 (which is pretty good).

After the gift shop, we started out wine tour.

So this winery (viñedo) was actually funded back in 1885 by Don Francis Undurraga Vicuña and is one of Chile’s most antique wineries. The plants used are imported from France (Francia) and Germany (Alemania) and are grown in a slightly different way compared to other places. A wooden stick is shoved into the soil, where the wine grapes are supposed to grow, with a  plastic bag covering the bottom area. The plant is meant to rise up along the stick and also along a wires that are connected from stick to stick (use photo from slideshow above for reference). The reason there is a plastic bag on the bottom is so that rabbits or any other small mammals will not be able to eat the grapes. Following the tour guide, we gazed over rows and rows of crops, so far the they disappeared into the distance. Of course it would have been more beautiful if it was full of life and green, but seeing that it is technically winter in Chile, I would understand why the land looked as bare as it did. The scenery still looked great with the tall trees and the faded mountains in the background.

Moving on ahead we reached these large, steel wine tanks with large-but-damaged cement tanks around it. The tour guide then confessed that the winery uses modern technology to go about making their current wine and that using their old equipment would just complicate the process and even hinder it. He joked and said that he was worried about the winery continuing to use modern technology over time because soon they were going to replace him with a robot. Afterwards, the tour guide gave a brief explanation of fermentation and explained how the wine gets its color based on the skin of the grapes. Interestingly enough, he told us that any colored grape can make white wine as long as you take the skin off, but no white grape can make colored wine.

Next we headed into the wine cellar which had a creepy vibe to it. The room was dimly lit and slightly cold. This was so the wine could maintain a moist temperature. We went through a row of wine barrels (as seen in a photo above) and reached what almost seemed like a sacrificial/ritual table. It was just randomly placed at the end of a dark room haha. 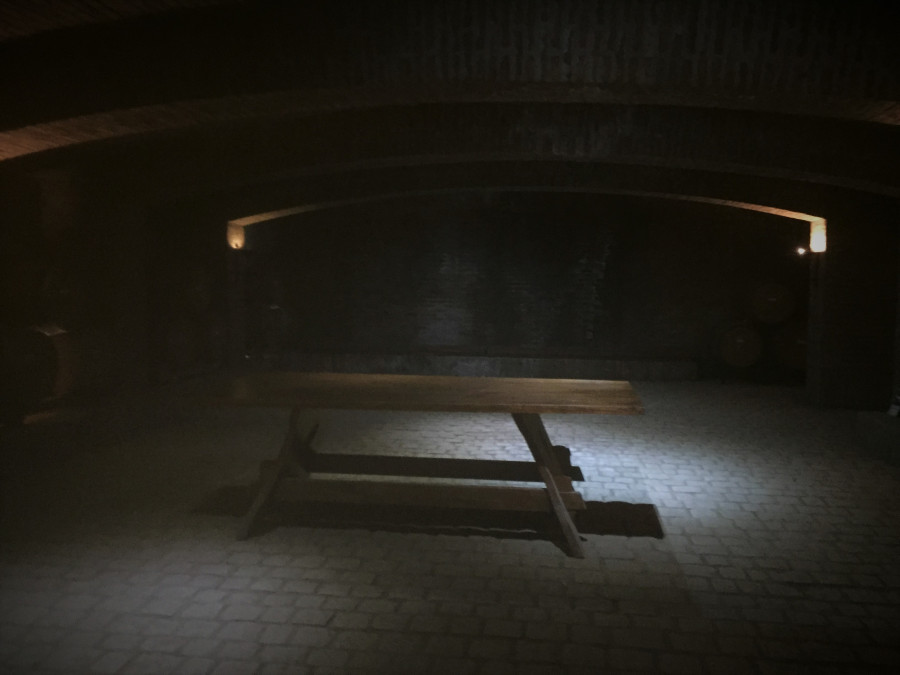 Anyways, the tour guide went on to show us how the workers here check how much wine is in each barrel without opening it since removing the cork would expose the wine to air and allow it to evaporate. Simply, with the barrel laying sideways and the cork part facing upwards, you would tap on the bottom of the barrel and listen to the sound (kind of like when someone taps on a wall to see if it is hollow). After that, we were brought to a nice, little historical collection of the Mapuche tribe. Don Francis actually had this collection in his home, but decided to make it part of the winery for people to see whenever they visit.

Finally, the moment we were all waiting for, the tour guide brought us outside to a long table to drink wine. I cannot recall the exact bottles he let us try, but I remember the first and third glasses were red wine which had a pretty strong taste (many people disliked it and poured it into a bucket on the table), the second glass was white wine and had a very sweet taste and was easy to gulp, and the last, which the tour guide saved for the end since he said it had a weird taste compared to the others, was this orange-colored wine with a taste does was right in the middle of strong and sweet. All of us pretended to be wine critics as we swirled the glasses around with our thumb and index fingers and took a whiff, commenting on what the scent reminded us about. We would then clank the cups and make a toast to Chile. With the tour already being such a fun and memorable experience, the icing on the cake was that the guide allowed us to keep the wine glasses we drank with and even gave us a box to place them in.

After drinking about 4 glasses of wine and some leftovers of the last bottle, everyone was merrily laughing and chatting on the bus ride home as well as at this amazing Peruvian restaurant we went to afterwards. That was a day well spent indeed.