Hola amigos! This will be another helpful post for any future Drexel students thinking about studying abroad in Chile. Though there is many taxis and Ubers here, public transportation is almost a must in Santiago. There are some areas that are a little far off from transportation, but the Metro and micro (bus) usually take pretty close to the area. Furthermore, the thing about taxis and Ubers is that they can be a little dangerous. especially if you are by yourself. I would not recommend going into one alone just because of the possibility of being kidnapped (as I have heard has happened to one foreigner). Also, less worrisome, but still a problem, taxi drivers will usually try to charge you more if they can tell that you are a foreigner. They do this by taking strange routes and longer paths so that the meter goes up.

Anyways, today I will be teaching you about the Metro/Micro system here in Santiago, Chile. 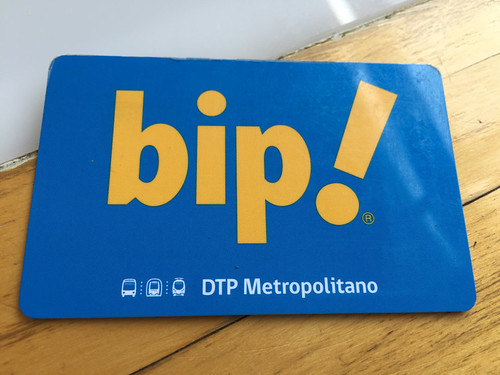 So first things first, (I’m the realest) for anyone who is planning to stay in Santiago for quite some time, it would be very useful to buy a bip card (“tarjeta bip”). These can be purchased at any metro station or any of the “Centros bip!” stands around Santiago. These cards are kind of like a SEPTA transpasses that you keep and can put money into. Of course you can always just buy a regular Metro ticket, but that requires you to have to wait in line at the Metro station stand when it is much more easy to purchase a bip card (which is $1,500 Chilean Pesos or $2.40 USD) and put a good amount of money into it (with a minimum of $1,000 pesos every time you recharge the card). Furthermore, while you can buy a ticket to use the Metro, you can only use the micro with a bip card. Thus, it is sort of necessary to own one. However, the cool thing about using a bip card is that if you transfer from Metro to a micro (or vice versa) with your bip card, you have period of time (about 90 minutes) where the cost of the next ride will be completely free. For example, when I went to Parque San Carlos de Apoquindo this weekend, I took the Metro to Baquedano and took a  micro right afterwards. The cost of the Metro was $660 CLP (Chilean Pesos) and the micro right afterwards was free. However, the free ride is only usable once per transfer. So do not think you can scan yourself and all of your friends in for free. Talking about scanning for your friends, that is completely legal in Chile since you are still paying money, you are just doing so for someone else. So if my friend happened to forget their bip card, I can just scan myself in and then handover the card for them to scan. What are we using to scan are cards exactly? I will show you right now. 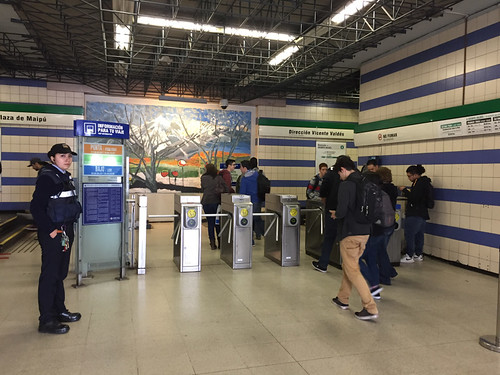 The metal turnstiles are where you must pass through to enter the Metro. There is a slot on the top for tickets and the yellow, circular pad in front is for bip cards. You just scan your card, it will make a *beep* sound (hence the name of the card), the price of the fare will appear as well as the amount of money in your card, and you can now pass through. 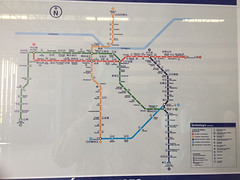 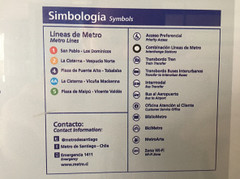 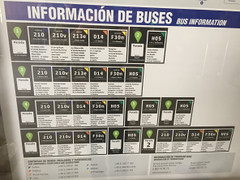 In order to switch from one line to another, you can see there are big, white dots in the spots where the lines intersect. Those dots represent interchange stations (“Combinación Líneas de Metro”). So, for example, if I get on at station Rodrigo de Araya and need to get to Station Tobalaba (this is station closest to Mall Costanera by the way), I would take the Metro to station Baquedano and change lines. Then from Baquedano, I would take the Metro heading to Los Dominicos for 5 stops until I get to Tobalaba. It is really simple and I have never got lost using the Metro system.

Another thing about the Metro system is the concept of Green and Red stops on each line.

You cannot see this on the Metro system map I had first provided, but when you get on the Metro you will see a line like this above the doors. There are stops that are red, green, or both red and green. I have not completely figured out the exact houring, but I think it is only during Rush Hour that the Green/Red Stop system is in use. The way that it works is that the Metro will have lights on the outside of it that either flash green or red or do not flash anything at all. If it flashes green, it will go to each stop that has green in it (e.g. Cerro Blanco and Santa Anna). If it flashes red, it will go to each stop that has red in it (e.g. Patronato and Santa Anna). A red Metro will never go to a solely green station and vice versa (e.g. red Metro would skip Cerro Blanco and green Metro would skip Patronato). If the Metro is not flashing any colors, which is how it normally is, it will go to all stops.

The black circles in the line above represent the interchange stations I mentioned with the colored numbers underneath representing the line it changes into. You may also see that there are 2 other colored/numbered dots. Those are for line 3 and line 6 which are currently under construction. That is why those stops do not have a black circle on them.

As for the micro system, it does not need much explaining. It is just like any other bus system in the US. Plus, there is no actual map of all the bus stops, but the image I included above with the Metro system map and key, gives the number and area of all the stops.

I hope you guys found this helpful!