As I mentioned in my previous post, I have had a number of administrative issues. The purpose of this post is to provide anyone who is planning on coming to France for an extended period of time an overview of how things work here, while providing some anecdotal comic relief (Spoiler Alert: “efficiency”does not seem to be in French administrative vocabulary.)
So, for starters, let’s talk about housing: 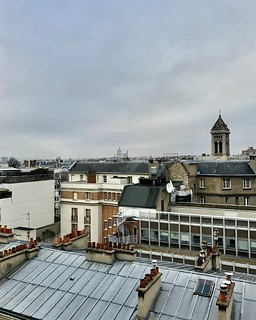 If I could give one piece of advice about finding housing in Paris, it would be: do not commit to housing for an extended period of time without seeing it first, especially if you are on a budget. Let me digress: I booked the most perfect AirBnb in Montparnasse (15 minute walk from Sciences Po) with a fantastic view (see below). However, it was not at all perfect because, as I soon discovered, it was on the 7th floor with no elevator, 146 stairs up a winding staircase. Oh, and there was mold in it—lots of mold—which ended up making me very sick since, as I found out, I am allergic to mold.

Long story short, I ended up meeting the family of an acquaintance from Drexel who is from Paris. These angels took me under their wing, helped me figure out what medicine I needed to get better, helped me find a new apartment and let me stay with them for a bit while doing so. I honestly cannot be more grateful for the kindness they have shown me as a complete stranger, which has been a testament to the true generosity of the French people. 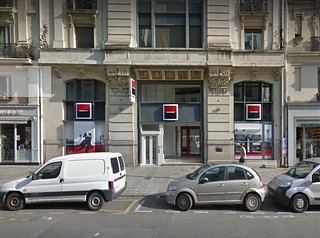 Now, as a proper adult in an apartment, I had to secure electricity, gas, internet, and housing insurance. But before being able to do that, or anything in France for that matter, you need a bank account, because these things are paid by prélèvement SEPA or Carte Bleue (because why would utilities companies accept an American Visa of MasterCard?) However, to get a bank account in France, you need to make an appointment with a conseillir who will be your point of contact for literally everything having to do with your personal finances, and you will have to bring every document under the sun, and, if you are unfortunate enough to be an American citizen, and therefore subjected to FATCA, every document under the moon as well.

Thankfully, I had all of my documents in order and was able to have my account opened and received my RIB (short for relevé d’identité bancaire, a document outlining your bank details), so I could finally pay for my utilities. But not so fast! My debit card would come a week later, to the branch, who would inform me of its arrival by letter, of course. But nevertheless, I was finally able to begin the process of getting my utilities. I had never even done this in the US, where everything is in English; how on earth was I supposed to figure it out here, in French, while in France?

Well, it would take another two weeks, as you need to make a separate rendez-vous for each one. And what is a rendez-vous? On paper: a four-hour period that I need to be home because a technician could show up at any time. What this means in practice: the first five minutes after this four hour period, when the technician actually shows up.

I am proud to say that after a month of jumping through hoops, I am finally an established human being in France (well with some exceptions). Although it was trying, I am actually glad that I ended up having to go through this. See, with an AirBnb, everything is in the name of the owner, and I know a number of people who have been put into an awkward position as AirBnb is not recognized under French law, and many AirBnb owners run into issues with the French tax authorities. With my new place, I have a legal contrat de bail (rental agreement) with utilities in my name, which actually offers a lot of consumer power here. Having a justificatif de dommicile (proof of residence) is very important here, and has been essential in a number of steps from validating my visa, opening a bank account, and even getting a SIM card (there are exceptions where you can get a SIM card without a justificatif de dommicile, but of course they don’t inform you of this.)

For the time being, though, it appears that I am settled and have mostly everything taken care of. Regardless, as I’ve learned, I am not going to let this instill a false sense of security in me because when it comes to the French administration, you never know what kind of fun surprises are lurking around the corner. And there is always a surprise lurking around the corner.