Just like at Drexel, the classes at my university in France start a little late, towards the end of September. The university that I attend is called Université Rennes 2 (Rennes 2 for short). It is the liberal arts school in Rennes, whereas Université Rennes 1 is the STEM-focused school, and is located on a different campus. At Rennes 2, there is a program called CIREFE, le Centre International Rennais d’Études de Français pour Étrangers (the International Center of French Studies for Foreigners). CIREFE hosts students from all over the world studying all levels of French, from beginners to those approaching fluency. Almost all of CIREFE’s classes are housed in one building, and classes are separated by level. Most of our classes are taken with the same core group of students. They try to mix up the nationalities so that it’s harder for us to speak our native language.

CIREFE courses almost have a community-college vibe because people of all different ages attend them for all different reasons. Some of us are there to study abroad, some people are there because they moved to France for a partner or a parent and need to learn the language. There is a thirty-year old Brazilian lawyer who came to Rennes, because he wanted a masters degree and believed it would actually be cheaper to learn French from scratch and obtain his masters here than to pursue his degree in Brazil. There is even a woman who came to hide from the government of her home country because she didn’t pay her taxes.

It is really very interesting to sit beside someone from Brazil or Colombia who speaks a romance language and hence has reached my level of proficiency in a few short months, and on the other hand sit next to someone from China or Russia, who has been working six plus years to acquire this level of proficiency, having to learn a whole new alphabet and unfamiliar tenses. Each culture struggles with different facets of the language. Some students struggle with distinguishing Ts and Gs and Cs, so that gateau sounds the same as cadeau. Some students aren’t used to raising their voices at the end of a question because they don’t have to do it in their languages.

As for the university’s campus? To me, it feels relatively small, and kinda plain. The 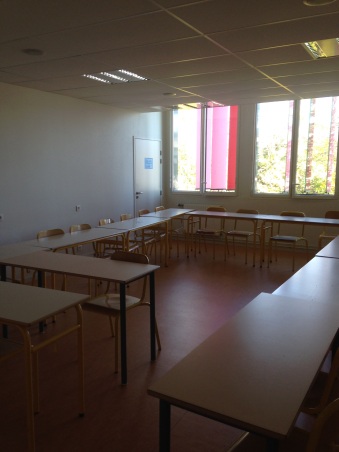 classrooms are old and not particularly high-tech. However, remembering that students pay less than 500 euros per year to go here, it’s not too shabby. We even get allotted ten euros for printing each semester and there is a student cafeteria where a full meal only costs €3.25. It’s a very different feeling that of an American campus. Here, most of the native French students only dorm out of necessity and go home to their families each weekend, so come Friday, the campus is full of wheely suitcases and duffel bags. But even though Rennes lacks a school spirity-vibe, it is very-much a university city. There are young people everywhere and there is always something to do.

CIREFE is especially helpful in inviting the international students to cultural events like soccer matches, plays, and concerts. They also organize a few intercultural “soirees” each week in bars or restaurants where we can go to practice our french with other students and French locals. Relying on your French abilities to meet people and make friends is daunting. It would be easy to fall into a pattern of hanging out with the Americans you know from your program. Luckily, CIREFE gives you every opportunity to meet new people.

View all posts by Heather Heim