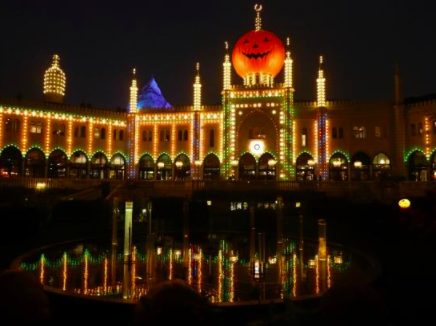 Halloween. Thanksgiving. My birthday. Christmas. And all the time in between. These markers in time are part of what make my annual “Holiday Season.”

When I accepted the opportunity to study abroad in Denmark this Fall Term, I knew that I was giving up the chance to spend each piece of my favorite time of year with my family and friends at home. Instead, I would celebrate (or replace) each cultural and personal celebration that had remained consistent for the last 21 years of my life, now with people I had only know for a few months, at most, in a place that was strangely so similar yet so different from home, all at the same time.

Fortunately, I had found a “home away from home” and a “second family” in DTU, Denmark, my new friends, and, above all, my kitchen mates.

While Halloween is more of an American tradition, it’s gaining popularity in Denmark. In Copenhagen, specifically, there were many a Halloween party and similar events around the various districts and venues. One of the well-known Danish amusement parks, in the heart of Copenhagen, Tivoli Gardens, is known for its all-out “spooky” theme park decorations. Danish celebration of this holiday still a relatively small, and up-and-coming holiday here, but the Danes will make the most of almost any genuinely happy and fun celebration, and continue it for weeks before and after the actual days of normal observance.

The students at my host university, DTU, are no exception. Among the semi-regular events around campus throughout the semester are bar crawls and student parties, both for special holidays and for random celebratory occasions. For the weeks leading up to Halloween, there were many a costume-themed party going on at the various bars, and kitchens from each campus dormitory were getting their spooky groove on.

For one of these Halloween campus crawls, some of my kitchen mates effortlessly dragged myself and the other exchange student in the hallway, Maria, along with them. Since the group couldn’t decide between ninjas and ballerinas, we all became “ninja ballerinas.” To stick with our theme, we danced majestically together on every makeshift dance floor and ran away with epic jump kicks until we ran back to our kitchen to end the night.

In the beginning of November, my kitchen mates and I threw a Halloween party. This was just one more of many seasonal get-togethers my kitchen (and many others on campus) held. One of my neighbors, Mette, is a Vector – DTU’s version of Drexel’s Orientation Leaders – meaning that she, because of her role in welcoming the new students to the university, is fantastic at running games. And that night, she held many a group-bonding activity for us all, and when we finished, we danced the rest of the night away to some groovy tunes from all over the world.

Entrance to Tivoli Gardens during the Halloween Season. visitdenmark.co.uk

Another view of Tivoli Gardens during Halloween season. tripadvisor.co.uk

A “Gobbled” up Thanksgiving dinner with friends, old and new.

A few weeks later, Thanksgiving came rolling around the corner. This was the more difficult of the two holidays to think about honoring away from home and my family, knowing that I couldn’t be with my parents, my brothers, my cousins, nor could I acquire a food baby via inhaling the same turkey, stuffing, cranberry sauce and mashed potatoes as the rest of my kin.

As both Copenhagen and DTU house many international guests, especially Americans, there are various Thanksgiving dinners around the city and campus for Americans and others wishing to experience the tradition. Unfortunately for many of us who aren’t accustomed to how thoughtful the Danes are in organizing events, most of these dinners (similar to other public gatherings) required tickets that were sold out well in advance.

However, as I was not the only American, nor the only student on campus wanting to experience another culture, a Thanksgiving with new friends would do more than suffice for each of us grasping for some piece of home.

Days before Thanksgiving, a couple of us realized that we could throw together a casual dinner and, with the help of our guests, still acquire our much-anticipated mashed potato food babies. After a series of random yet fortunate events, the meal didn’t go exactly as planned nor did it have the foods that are classic for many American Thanksgiving dinners. Rather, my friends and their kitchen mates had made a semi-Danish “Thanksgiving dinner” – different meats and “brown sauce” – and I provided the “healthy” beverages. I could argue it was better to some degree because I didn’t have to do anything other than show up, help my old friends and new eat all of the food. (This also included dessert, consisting of warmed up brownie batter “soup” topped with brownie that was actually cooked – don’t ask me how that happened, I take no responsibility for it!)

These definitely weren’t the Halloween and Thanksgiving traditions I was used to, but in many ways, they were so much more memorable.

View all posts by Lindsay McCarthy