Two years ago at the beginning of my first co-op I made two short-term goals. The first goal was to obtain a co-op in a different area nationally and after the co-op be able to study abroad in a different country. From that day I did everything I possibly could and successfully was able to make both of my goals come true. Personally, I knew that for my growth it was time for me gain a whole new perspective on life. I needed to be submerged into a typhoon of different, and at the end of the tunnel I would come out a better man. I am glad to say that this experience was everything I needed it to be and more. Life goes by extremely quickly. The present can have thousands of sporadic pleasantries and hardships and in an instant, those experiences become the past. Every single day while abroad I reminded myself of this fact and did my best to have no regrets about any of my decisions.

One thing I’m proud of myself for doing was getting involved with different opportunities the university had to offer. While I was studying at Ruhr-Universitat I decided to participate in Hip-Hop classes and Intramural Volleyball. I’ve always been a decently good dancer, but it was in Germany where I took an actual dance class for the first time. The most interesting thing about joining these classes was the communication. The classes were taught in German and most of the people I played with did not speak English. But even without being able to verbally communicate all the messages were still conveyed. I was still able to learn all the choreography for Hip-hop and I was still able to play well with my teammates in volleyball. In volleyball, I even got to keep the score in German using the numbers I’ve learned in class. Because of the way I danced at different events, I became a little bit known by different groups on campus. I was even approached to teach a little workshop about West-African dances to a group of German students who were interested. It was also a paid position! Unfortunately, the event was canceled due to low interest, and the choreography I created was never able to be implemented.  However, being able to still enjoy my hobbies while abroad brought me a lot of joy. 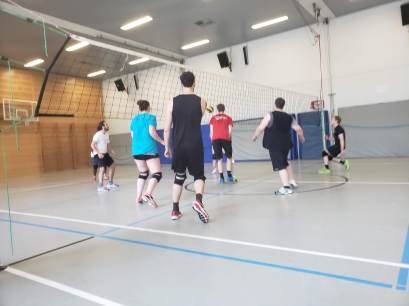 I am most grateful to all of the wonderful people I’ve been able to meet while I stayed in Germany. Every person I interacted with affected me in some way and made me grow as an individual. Whether the interactions were good or bad. Before coming I was admittedly worried about whether or not I would be able to connect with anyone in Germany. I’m glad to say that I have a lot of friends in Germany that I am going to miss. Even though we had a multitude of cultural differences we were able to see past those and love one another as people. It’s such a simple concept, that at times can be difficult to truly understand. At the end of the day, we are all just human. Everyone no matter where they come from have their own worries, issues, hopes, dreams, and relationships. I don’t think I would have ever fully grasped the idea of how similar we all are as humans until I went halfway across the world and had the opportunity to converse with the people. Thank you to my friends for all of the late nights and early mornings. For the joys and the laughter. And for the gift of your presence. Those memories are truly precious to me.

Even though studying abroad in Germany was the greatest experience I’ve had in my adult life, after the three months I was definitely ready to come back to the United States. Even though I love Germany I don’t see myself ever being able to stay there. I’m still waiting for that feeling of experiencing and falling in love with a place. Throughout all the places I’ve lived, I never felt like I truly belonged in any of them. But I definitely do not think I belong in Germany. Even though I was able to become very comfortable in the country I still felt very different. And even though people might have not consciously known what they were doing. They still treated me differently. I feel that way a lot, but at least in the United States, there are places I can go where I can blend in. I wasn’t able to find a place like that in Germany. Also, I did not love most of the food I had there. I missed the abundance of options there are in the United States. Because I only knew a little bit of the language I felt handicapped in Germany. The way I convey a lot of my personality is through the way I speak and the diction I use. I couldn’t fully utilize all of my persona, and at times I feel as if it held me back.

I have been back in the states for about a week now, and one effect that I’ve been told might happen is “reverse culture shock”. Personally, I don’t think I truly experienced it, but I do feel different. I remember everything I did in the states used to be so natural. My life was based on my surroundings, and I didn’t get to be influenced by much else. But after gaining a more worldly view, I find myself having a lot of questions. I’ve been comparing multiple different lifestyles and have been contemplating about the future I want to see. I don’t think it’s possible for me to look at things the same way ever again, and that is truly a blessing. I danced, laughed, listened, argued, traveled, ate, discovered, persevered, learned and on many occasions barely slept. And I wouldn’t have had it any other way. Vielen Dank Deutschland!

I'm studying abroad in Bochum, Germany over the Drexel Spring term of 2018. I'm elated to embark on a new experience. View all posts by Samuel Opawumi