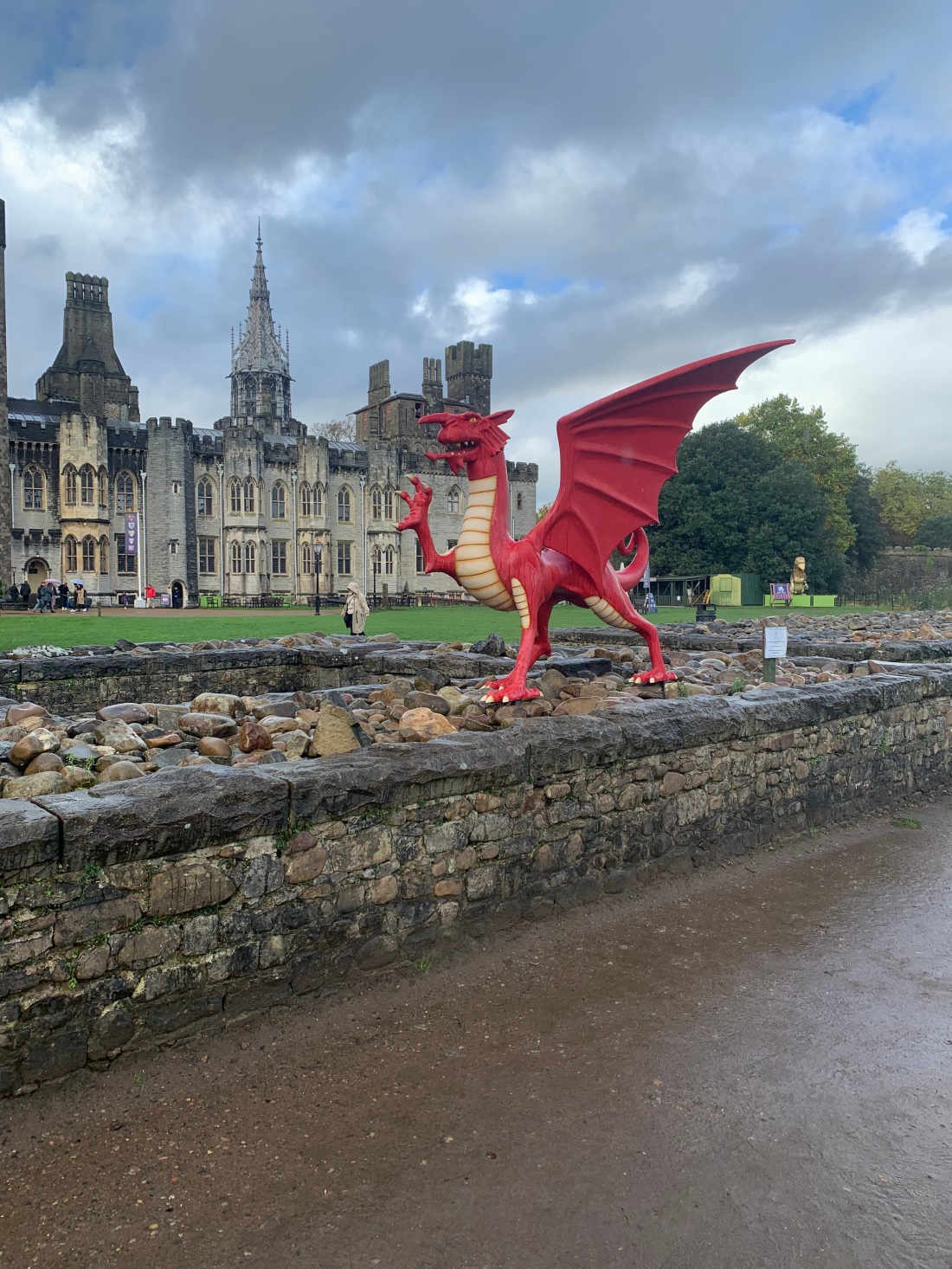 Last Wednesday night I realized I hadn’t planned anything for the weekend and spontaneously decided to book a train ticket to Cardiff for Saturday. Cardiff is the capitol city of Wales, located in the Southern Coast of the country, and is only 45 minutes from Bristol. Like the rest of western England, a storm was passing through southern Wales this week, so I expected a very cold and rainy day trip. I had my boots, raincoat, and umbrella, so I was well prepared.

Compared to buses in the UK, trains tend to be the more expensive way to travel, however this time they were about the same price. Omio is a travel booking site that allows you to check ticket prices anywhere within the UK and it compares transport by bus, train, and flight to help you make the decision that best fits your plans. I selected the off-peak day return option, only available for trains, which enabled me to finish the sightseeing I wanted to do at my own pace and hop on the next earliest train to Bristol instead of having to adhere to a pre-selected departure time.

I arrived at the Cardiff Central Station in the late morning, and immediately began the walking tour I planned the night before using GPSMyCity—a website filled with resources to help you plan a trip, including pre-made walking tour maps and guides. I used it during my trip to Bath, which I loved, so I made sure to use it again to plan my day in Cardiff. There was an option to create your own walking tour based on what you wanted to see and do in the city. I chose the “Cardiff Introduction Walking Tour,” which was designed to hit all of the major tourist spots in one afternoon.

Cardiff Castle was the first place I visited, and I spent a lot of time walking the grounds and admiring the architecture. Wales has more castles per square mile than any other country in Europe, so to many Europeans, Cardiff Castle may not seem that exciting. I, however, was in absolute awe staring up at the grand entryway and ancient spires. As a Drexel student, I was excited to see a dragon statue in front of the castle, the official mascot of the Welsh Rugby Union. I instantly thought of Mario the Magnificent, and how he had a Welsh cousin across the pond!

I had planned on visiting the Cardiff National Museum, but the weather was still nice outside so I decided to continue exploring outdoors. I trekked a mile and a half from the city centre down to the harbourside. There were tons of giant seagulls and cute ducks around too, and many waddled up the walkway where people were feeding them bits of bread and chips (French fries). The sun came out for the first time that morning right as I was staring out into the bay and it was magical. I walked along the docks and watched several sailboats set off into the sparkling bay.

I headed back towards the city centre where I spent the rest of the afternoon wandering the cobblestone streets lined with cafes and boutiques. Several streets were also shut down to make room for the weekend markets where people were selling their homemade clay jewelry, candles, bakery sweets, and all sorts of trinkets. By the time I had meandered through, most of the stalls had been cleared out so I recommend scouting out your favorite items early and purchasing them before anyone else can get to them!

Saturday was also the day of the big Wales vs. New Zealand rugby match, so many vendors set up stands along the roads selling team scarves, hats, flags, as well as team coloured face paints. Kids and adults alike were decked out in red and were radiating team spirit. The sports culture in Cardiff that afternoon reminded me of Philly on game days and how there’s always excitement in the air. Suddenly, it started pouring! I quickly rushed into a little cafe and decided to take a break. I’d been walking all day and it wasn’t until I sat down in a big cozy chair that I realized how tired I had become. I ordered a coffee and happily sipped on it while watching people scurrying about and ducking for cover in nearby shops. At this point, I had finished up everything on the walking tour list and waited for the rain to end before heading back to the station.

The flexible train ticket I had bought really came in handy as I was able to hop on the next train to Bristol as soon as I arrived at the station even though I had initially reserved it for 5 pm. Before I knew it, I was back on my way through the countryside of western England, passing many farms with horses, cows, and sheep. Eventually the rolling hills turned into villages and then skyscrapers came into view; I was back in Bristol! It was another jam-packed day, and while my legs feel like jello, I take it as a sign of a very successful outing!

A Message from the Office of Global Engagement:

The safety and security of Drexel students is a priority for the University. As part of the efforts to support Drexel students that are studying abroad during the COVID-19 pandemic, the Office of Global Engagement has conducted a rigorous review of programming and provided additional support to participating students with customized pre-departure orientations and regular check-ins during the required self-isolation period and the term.

A biomedical engineering major currently studying at the University of Bristol! View all posts by Shreya Srinivasan