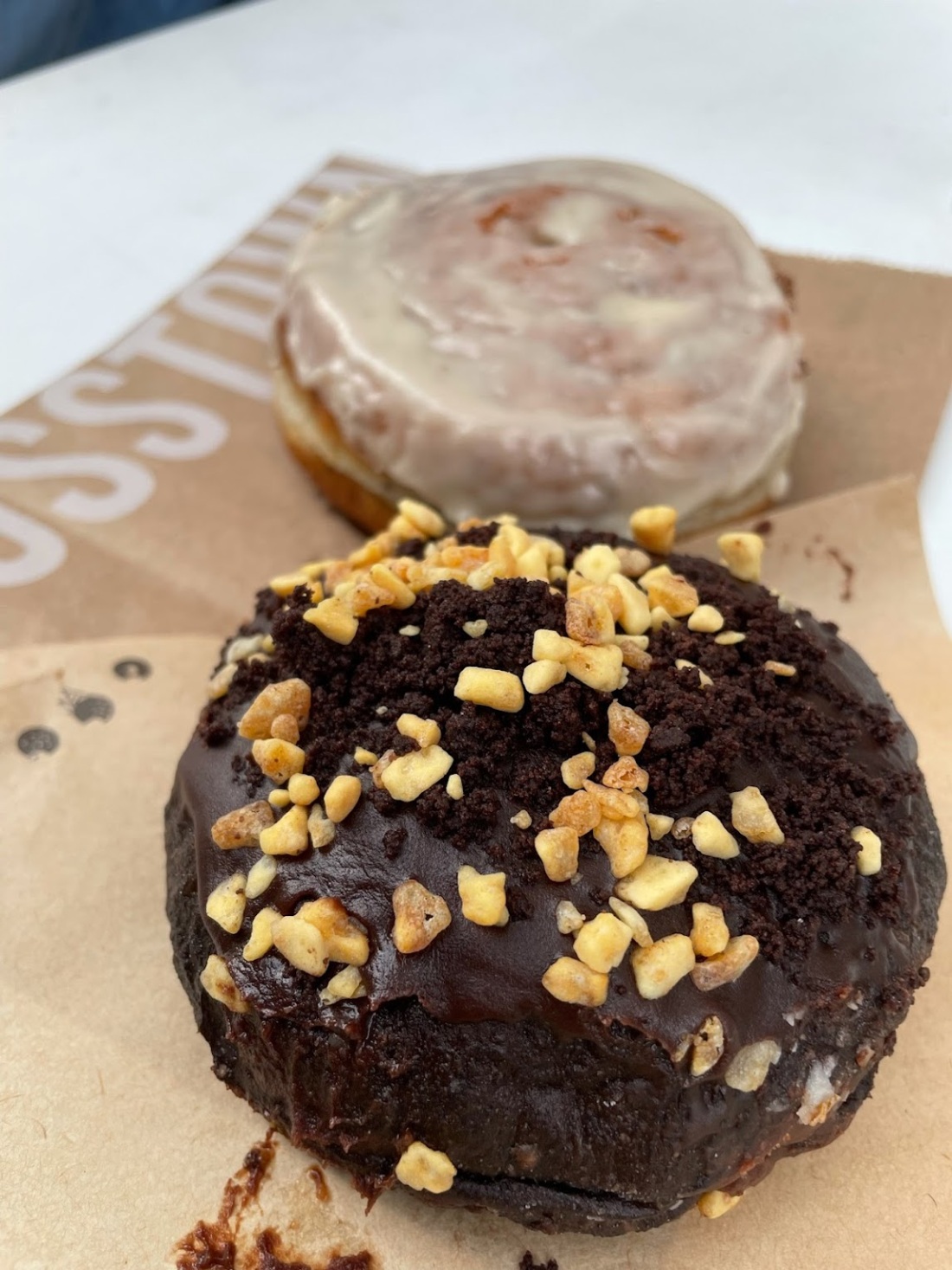 With COVID restrictions lifting slowly here and there, I got the wonderful opportunity to travel to London. In a country that speaks English, I got the luxury of just requesting that my meals were vegan and not having to say “Senza latte e uovo e formagio e burro e prodotti animali per favore!!” I took full advantage of the plethora of vegan options that were available to me and had some incredible meals!

To start off with, I had this protein-packed meal consisting of curried lentils and falafel! I know that London doesn’t exactly have the most well-known food scene, but the beauty of that is how it became a sort of melting pot providing all different types of cuisine. This Mediterranian/Middle Eastern styled meal was so satiating and was exactly what I wanted after walking around in the cold London rain! The falafel came with a side of a tahini dipping sauce and they were perfectly crispy. I was very excited to pair this meal with a passion fruit flavored kombucha! I cannot seem to find kombucha anywhere in Italy and this was just what I had been craving!

Just as a quick side note, I passed this place that I had seen while researching vegan food in London. I did not have the chance to go in, but this place is called Vantra and as displayed on the sign in the left picture, it is an all vegan restaurant. It was actually the first fully vegan and organic restaurant in Europe. While I cannot personally vouge for the restaurant, the reviews are soaring and if you are looking for a wholesome plant-based meal in London, I am sure Vantra would prove to be a great choice.

This was THE BEST MEAL that I ate during my stay in this amazing city. On the right there are four pieces of crispy, golden brown falafel. The seasoning on these was absolutely perfect, which is saying something because I often find falafel to be very salty. Underneath that, there are three different salads. Each one was rich with parsley and had a variety of fresh, crunchy vegetables like cucumber tomatoes, red onion, and purple cabbage. In the left side of the container were the best sweet potato ‘chips’ that I will maybe ever have. They were cooked twice, first boiled and then fried, making them soft and almost cake-y on the inside and crunchy on the outside. They were lightly salted and perfect to dip in the garlic aoli and chili sauce that I elected to eat with it. This restaurant, called Olives and Meze, was a hole in the wall spot with room enough for three tables pushed up against the walls. This provided for awesome time to converse with the employees and discuss the age old conversation of chips versus fries! I give this place a 10/10 and my friends that I was traveling with that ate the non-vegan options also concur.

My sweettooth was not going to let me leave the United Kingdom without searching out the best vegan donut around. Lucky for me, Crosstown donuts was less than a mile away from my hotel! I ordered the cinnamon bun donut and the chocolate peanut butter donut. There is nothing like this in all of Rome (trust me, I’ve looked) so I went ham on these. They were A-MAZ-ING!! The consistency was more like a cake dough more than a fried dough and surprisingly, they were not overwhelmingly sweet. The chocolate peanut butter donut had a nice rich chocolate flavor to it and the peanuts on top provided some nice texture. The cinnamon bun donut peeled apart in a circle like a regular cinnamon bun would, but the dough was different from the traditional enriched dough that makes a cinnamon bun. I would easily travel back to London just for these donuts!!

All in all, London is an incredibly vegan-friendly city and I cannot wait to go back and visit again some day!

A Message from the Office of Global Engagement:

The safety and security of Drexel students is a priority for the University. As part of the efforts to support Drexel students that are studying abroad during the COVID-19 pandemic, the Office of Global Engagement has conducted a rigorous review of programming and provided additional support to participating students with customized pre-departure orientations and regular check-ins during the required self-isolation period and the term.

View all posts by MorganTripi