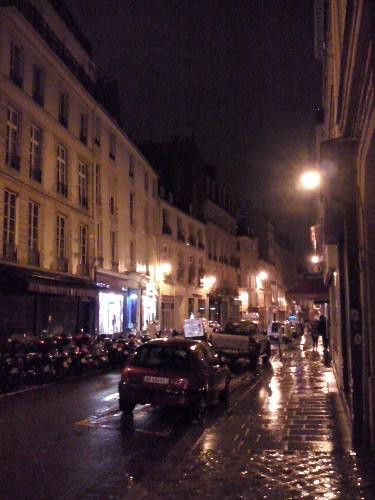 Here I shall relate the events that occurred beginning on my third day in Paris as they happened.
I woke up to a cloud and rainy Tuesday morning. I packed my things and left at about 8am. I entered the metro station. I had bought a day-pass the day before, but it had unexpectedly stopped working the previous night. Because I was on my way out of Paris, I felt it would be a waste to buy a new pass, so I walked through an open entrance without any ticket. What I didn’t know was that there were three police officers standing at the other side waiting for that very thing to happen, ideally, as I now reflect, for an innocent tourist to break a simple rule, so that they may exercise their useless power in a most cruel and unnecessary way. I was set free without penalty, but only after being made felt like a criminal, as if a drug smuggler had one weakness—an inability to but subway tickets—and that just because I entered without a ticket I could and must be responsible for several other horrible crimes.
I went then to the Gare du Nord, or north train station, to check the details on transporation back to Germany. For that day, the lowest price for a train ticket was 180 euros (that’s right, no typo: one-hundred and eighty). This, for those of you across the sea, is well over two hundred dollars. As I had arrived to Paris via car for 22 euros, I thought this price quite outrageous, and determined to get home another way. So, I once again resorted to the trusty BlaBlaCar (explained in a previous entry about “Transportation in Germany”). I called a number and asked about the ride for that day to Germany. After previously receiving a message in English, I thought it appropriate to speak in English on the phone. I thought wrong. I got across the point in French that I wanted to go to Germany. He said: “Port de La Chappelle, une heurre.”
I made my way to Port de La Chappelle, the main exit point of the city, where cars flood by on their way out of this European capital to destinations far and wide. But I was not free just yet to casually wait for my ride to arrive. I had to obtain the cash necessary to pay for such a ride. As it happened, Paris squeezed more money from me than expected, and the only cash I had was in the form on a 500 euro bill. What I then learned was that a 500 euro bill is not actually worth 500 euros, but rather it is worth absolutely nothing; that is, unless you transform it into smaller bills. So, I attempted twice to buy a small item (a stamp and a bottle of apple juice) with a 500 euro bill, both times, obviously turned down. I then entered more than two banks to be told they could not break the bill. It is at think point I finally realized what people mean when they said Parisians are rude (at least to tourists): twice, after asking “Parlez-vous anglais?” I received the same response: “Porquoi?”. Whereas most other people in the world upon hearing that question would immediately respond in English or say “no” in their language, these specific people, who were perfectly capable of speaking my language, were reluctant to do so for god-knows-what bitter reason.
To continue with the major objective, obtaining cash: I finally found an ATM machine which did not require a card with a “chip” (that being another obstacle in my way of getting cash, as American cards lack this specific safety feature, which is usually not tolerated in Europe), and I finally took out cash, ready, now, to embark on my trip back to Germany, assuming my ride comes to pick me up. Well, you guessed it: it didn’t. And so, glumly, I re-enter the metro station and buy that fateful day-pass once again, accepting the reality that I will more than likely be forced to stay another night.
My spirit not yet crushed, and so I have the idea that, while in Paris, I should make the most of it, so I head to one of the attractions I haven’t seen yet: the Louvre.